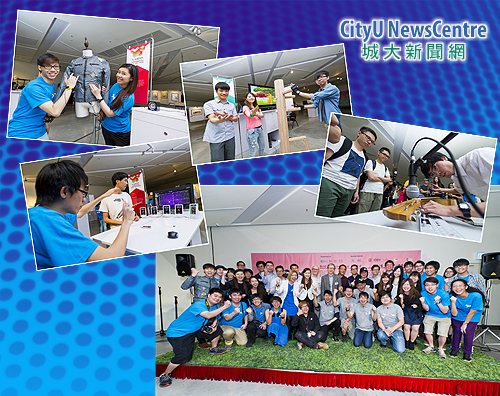 Over 40 outstanding artworks are being showcased at the “Playful Media 2014” exhibition organised by the School of Creative Media, City University of Hong Kong (CityU), from 24 June to 2 July. The artworks created by the students combine technology and art.
The works demonstrate the students’ spirit of discovery and their ability to innovate under the theme “Play, Smartly!” The works also show the creative application of classroom learning to digital entertainment, and their sense of social responsibility. The artworks include:
•        “One Man Band”, an inventive wearable sound instrument that plays music when worn and controlled by a musician. It was showcased at Open Dance #14, a multi-media dance performance organised by Hong Kong Arts Centre in March this year;
•        “Earth Pipe”, an interactive game reminding people to conserve water;
•        “Sunrise Orient at Sunset”, a series of black and white photos inspired by the Lamma Island ferry accident;
•        “Food Revenge”, an animation blending different techniques that aims to encourage the public not to waste food;
•        “Music Conductor”, a music mixer allowing the conductor to mix music created by various musical instruments. It can help solve the difficulty of gatherings for practice.
Professor Horace Ip Ho-shing, Acting President, Professor Jeffrey Shaw, Dean of the School of Creative Media (SCM), Professor Liu Zhiqiang of the SCM and founder of Playful Media, Mr Gabriel Pang Tsz-kit, Chairman of the Hong Kong Digital Entertainment Association attended the opening ceremony on 25 June.
Please visit www.playfulmedia.hk for details of the exhibition.
​