​Some 50 student works demonstrating a high level of creativity are being showcased at the “Playful Media 2012” exhibition held by the School of Creative Media (SCM) at City University of Hong Kong (CityU) from 13 to17 June.
A range of projects that merge art with new technology will be shown at the Run Run Shaw Creative Media Centre under the theme “Social Media for Fun in Life” in four categories: games, animations, installations, and photography and graphic design. 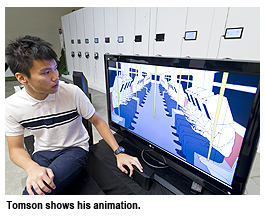 Among the projects is an animation titled “iMan”, which tells a story of how digital tools can transform humans.
“I came up with this story when I saw an interesting scene in the MTR,” said Tomson Chan Tak-fung, a Year 3 student in the SCM. “None of the passengers could stop playing with their smartphones and other devices. Then I started wondering if we are making good use of these digital tools or if we are being ruined by the new technology.”
The animation is produced by rotoscoping, i.e. combining live-action video with animation. Tomson shot the video footage first, and then traced over the video frame-by-frame. 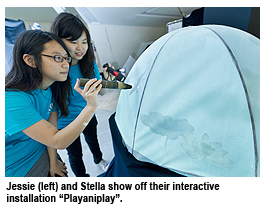 An interactive installation called “Playaniplay” provides a virtual space for visitors to create Chinese paintings with a light pen. The installation has a dome-shaped surface which represents the concept of “no ending” and acts as the drawing board.
Jessie Chan Hiu-kwan and Stella Fung Lok-man, who are both graduating from SCM this year, said the virtual world they created was beyond the boundary of paper. This gives them some inspiration to explore new possibilities in Chinese painting, for instance, changing the dimensions of paper. 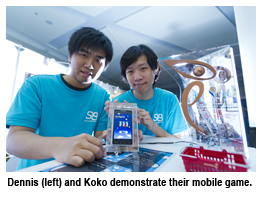 Another project is a mobile game titled “Can shooting” developed by Dennis Wong Chi-ho and Koko Tang Tsz-chung, who are also graduating from SCM this year. The players shoot the virtual cans on the touch screen, sending them flying into the sky.
“The players tilt and turn the device to move the screen and shoot cans from different angles. Multiple hits will be possible if you don’t take your eyes off the target,” Dennis said.
The game won the Best Digital Entertainment (Student and Independent Group) Special Mention (Mobile Game) in the 2012 Hong Kong Best Digital Entertainment Award organised by Hong Kong Digital Entertainment Association.

The exhibition was organised by the Special Interest Group (SIG) of the Bachelor of Science (Honours) in Creative Media programme. SIG is managed by students, allowing them to put into practice the skills and knowledge they have learned in class.
“I firmly believe that learning happens most effectively when students are given the space and opportunities to explore,” said Professor Liu Zhiqiang of SCM and the founder of SIG and Playful Media.
“Exploratory learning involves essential life skills such as the ability to learn by one’s mistakes, the capacity to reflect on oneself as a learner, and the ability to evaluate processes and products,” he added.
The student artists will be available to explain the creativity behind the projects and give live demonstrations. The opening hours are 11:30am to 7:00pm. Please visit www.playfulmedia.hk for more information.