​Researchers at City University of Hong Kong (CityU) and partner institutions in the US and Korea have celebrated a milestone in the history of East Asian studies with the completion of a major online database for Korean classics written in Chinese. 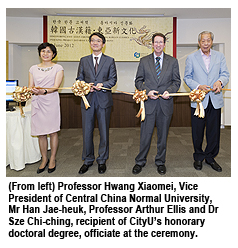 The database, created by researchers from CityU’s Run Run Shaw Library; the East Asian Library at the University of California, Berkeley (UC Berkeley); Jeju National University; and Kyungin Publishing Company, is highly significant for researchers.
For the first time ever, an index for the Han’guk yŏktae munjip ch‘ongsŏ (Korean Anthology in History), a collection of 3,000 volumes written in literary Chinese by influential authors from Korea over the past thousand years, is available on a database in three linguistic formats: Chinese, Hangul, i.e. the Korean alphabet, and romanisation.

A ceremony under the theme “Discovering East Asian Culture by Indexing Korean Classics” was held on 8 June to mark the launching of the database. Professor Arthur Ellis, CityU’s Provost, who officiated at the ceremony with Mr Han Jae-heuk, Consul (Culture and Press) of the Consulate General of the Republic of Korea in Hong Kong, said the creation of the database was illustrative of the culture of discovery and innovation within the CityU community.
“There are no boundaries or borders in an infinite universe, there are no limits on what we can achieve at CityU,” Professor Ellis said.
Mr Han praised the database, saying it would contribute to promoting mutual understanding between Hong Kong, mainland China, Korea and the rest of the world.
Professor Steve Ching Hsianghoo, University Librarian, said the database can help scholars reflect on different views concerning the development of East Asian cultures.
“The collection is now easy to browse through, thanks to this cross-regional and cross-linguistic collaboration between CityU and its US and Korean partners,” he said. “The literary works can be appreciated not only in Hong Kong, but also in the rest of the world.” 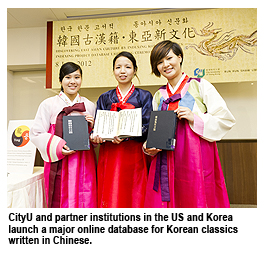 To complete the database, staff at CityU’s Library spent the best part of three years creating entries for, and indexing, over one million individual titles, chapters and authors. Experts from CityU’s Chinese Civilisation Centre and scholars of Korean and Japanese from CityU’s Department of Chinese, Translation and Linguistics provided essential support.
Completing the database has been a monumental task partly because it is not easy to read Korean works written in classical Chinese. There is no punctuation and the usage and writing style differ from classical works written in China.
But the database will be very useful. For example, it will help readers look up information about a particular period in which the works were written, such as background information on the different eras in Korean history, such as the Goryeo Dynasty (918–1392) and the Joseon Dynasty (1392–1897). 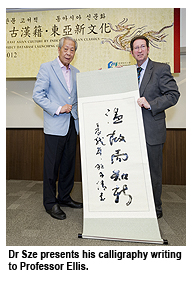 In addition, the entries that the partners in Korea and the US transcribed into Hangul and romanised using the McCune–Reischauer system are linked to full text images on the database provided by Kyungin Publishing Company.
Researchers in the disciplines of Chinese culture, literature and history think highly of classical Chinese works written by non-Chinese authors. Valuable information that might have been lost otherwise is often preserved, offering insight into the attitudes of countries towards China in the past.
China and Korea have been engaged in cultural exchanges for thousands of years because of their geographic proximity, and Korean authors have preserved the rich history and cultures of China and Korea in their works.