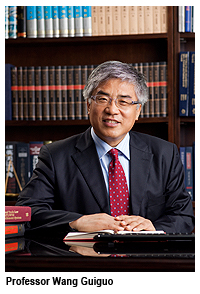 Chair Professor Wang Guiguo, Dean of the School of Law (SLW) at City University of Hong Kong (CityU), has been honoured as a titular member of the International Academy of Comparative Law. Professor Wang is the first scholar from the Greater China region to receive this honour, an appointment that reflects the international standing of CityU scholars.

The Academy is the premier international body in comparative law and one of the most influential legal academies in the world. Founded in 1924, it is located in The Hague, the Dutch city that is also the seat of the Permanent Court of International Justice and the Academy of International Law.

The Academy’s mission is to stimulate and conduct research, writing and intellectual exchange in areas of law that have a significant comparative law dimension. The 80 titular members from around the world, all of whom have made noteworthy contributions to comparative law, are elected by a two-third vote of the titular members preceding them.

“This appointment not only recognises my work in law but also symbolises the high level of academic standards achieved and maintained at CityU,” said Professor Wang, the president of the Academy’s national committee in Hong Kong.

Professor Wang added that CityU is a pioneer in nurturing students in comparative law, a response to the growing significance of the subject area. The University underscored its commitment to the field by establishing the Centre for Chinese and Comparative Law.

The University will continue to play a major role in the provision of legal education and training in comparative law, and will further maintain close links with other institutions specialising in this field. It will also provide a diverse community of scholars with a platform for the discussion and exchange of knowledge to better facilitate the comparative study of legal systems.