Professor Lin Yu-sheng, member of Academia Sinica, Taiwan, delivered a talk at the Distinguished Scholar Lecture on 19 December at City University of Hong Kong (CityU), entitled Theoretical Foundation of Academic Freedom and its Practical Implications, commenting that “it is easier to generate academic achievements and promote mutual exchange, coordination and collaboration if individual scholars are allowed to conduct research according to their own interests, ideas, intuition and impulses.” The lecture is one of the celebratory activities for CityU’s 25th anniversary.

Professor Lin first reflected upon the ideas expressed by the Chinese academic world about freedom of thought and academic freedom ever since the May 4th Movement in 1919. Then he defined the two concepts of “freedom”: negative freedom and positive freedom. He specified that negative freedom meant the absence of obstacles, barriers or constraints. In such freedom, an individual acts as he or she wishes. However, this kind of freedom may cause the general populace to degenerate into isolated “atomists” thinking only of themselves and showing no concerns for others. Positive freedom, on the other hand, meant the possibility of acting in such a way as to take control of one’s life and realise one’s fundamental purposes.

On the practical implications of academic freedom, Professor Lin expounded: “Strict measures should be adopted in the selection of scholars to be engaged in academic research. Once selected, the scholars should enjoy academic freedom to the fullest extent. Academic administrative organs should leave the scholars alone. The more academic freedom first-class scholars enjoy, the more time and effort they will be able to devote to academic pursuit, hence the more outstanding academic achievements.” 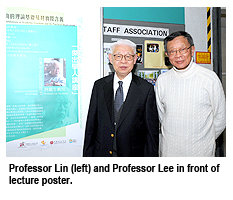 Professor Lin pointed out that scholars on the mainland and in Taiwan enjoy comparatively less academic freedom, therefore it limits their academic achievements. Taking the overseas Chinese Nobel laureates for example, Professor Lin explained, “The number of overseas Chinese winning the Nobel laureates is high compared to its overseas population, partly due to the Chinese families’ cultural tradition of attaching importance to learning. But the kind of academic freedom they enjoy is another important factor.”

Professor Lin pointed out that a fair and impartial system is crucial in selecting appropriate scholars for teaching and /or research positions. “Not everyone is suited for doing research. Only those scholars who feel an irresistible impulse or urge and have remarkable insight are suited for academic pursuit,” said Professor Lin. “At the same time they should be provided with some leisure.”

He said that, guided by fair and impartial academic norms and discipline, scholars engaged in academic research can best devote themselves to research of their own interest and make outstanding academic achievements. “A dynamic academic tradition is the best way to prevent academic freedom from being abused or misused,” added Professor Lin. 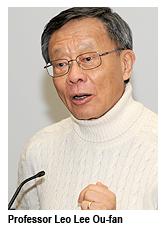 History Department in the National Taiwan University. Studying under Taiwan’s great thinker Yin Hai-kuang and Friedrich Hayek, a leading authority on Western liberalism, he conducted a systematic study of the theory of liberalism and published a number of monographs on related topics. Professor Lin Yu-sheng is an acclaimed master of the history of Chinese thought. The Distinguished Scholar Lecture was sponsored by CityU’s Cultural & Sports Committee. Professor Leo Lee Ou-fan, member of Academia Sinica, Taiwan, was invited to preside over the lecture.