Mr Patrick Tam Ka-ming, an assistant professor in the School of Creative Media at City University of Hong Kong (CityU) won two awards at the 19th 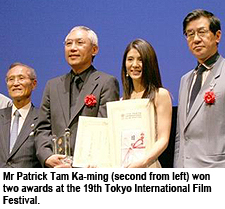 The experienced filmmaker, with credits such as Days of Being Wild and Ashes of Time, won the Best Asian Film Award and the Award for Best Artistic Contribution for his latest film After This Our Exile. This film was a joint effort between Mr Tam and some of his former students, focusing on the awkward relationship between a father and son after the mother abandons the family.

Mr Tam has taught directing, scriptwriting and editing at the School of Creative Media since 2000. Thanks to his extensive contacts in the filmmaking industry, Mr Tam is able to help his students find work with production companies where they can gain valuable work experience and apply what they learnt in class to the business of making films.

Mr Tam thinks teachers, like filmmakers, need to be creative, and the relationship between teachers and students should never be one-way. “Students learn from each other, and I often get inspired with fresh ideas after guiding students through their projects,” Mr Tam said.

To make films, students needed to draw on their experience of life and knowledge about cultural, Mr Tam said. He encourages his students to pay detailed attention to their surroundings, emphasizing that although he sees his role as a kind of bridge, i.e. helping students to find opportunities to show off their skills, they still have to put a great deal of hard work into their studies if they are going to succeed.

Mr Tam helped Dorothy Hui Ying-yin, a 2005 graduate of the Bachelor of Arts (Honours) in Creative Media, get an internship with a film production company belonging to the actor Mr Eric Tsang Chi-wai. She developed scripts over the summer in her second year in the School of Creative Media. Mr Tam was also the adviser on her graduation project, a short film entitled On the Brow, 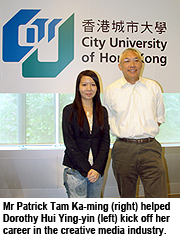 Under The Heart. During this period, Dorothy said she identified three key qualities needed for filmmaking: passion, commitment, and discipline.

“Mr Tam gave me a lot of advice, from the initial conception of the project to actual production. He is very conscientious about what appears in the screen, even down to the actor’s hairstyle! His teaching has helped me develop and grow,” Dorothy said.

After graduation, Dorothy was recruited by Mr Tsang’s company as a production assistant responsible for script writing, shooting and publicity. This was an eye-opening experience in which she gained a better understanding about her strengths, she said. “I hope to be an outstanding scriptwriter in the future,” Dorothy said.

Mr Tam also brought Christine To Chi-long, a 2004 graduate from the School of Creative Media, to the attention of Mr Tsang. Christine went on to demonstrate her scriptwriting skills with her debut film Jianghu. In addition,

Heiward Mak Hei-yan, a 2006 graduate, kicked off her career in the creative media industry with a job on the movie Men Suddenly in Black 2.

Christine said Mr Tam was a very special teacher who liked to use his students’ real-life experiences as starting points for discussion. Film production is not just about replicating skills, she realized; it is living art.

Heiward said Mr Tam was passionate about film and education. “Mr Tam makes me understand the importance of creative thinking and logic. These qualities have had far-reaching impact on my growth and career so far,” she said.

CityU’s School of Creative Media, established in 1998, focuses on the training of professionals with cultural awareness and the capacity to integrate theory and practice, technology and the arts. In view of the importance of internationalization, it established the Trilateral Partnership with the Beijing Film Academy and School of Cinema-Television of University of Southern California in July 2004 to promote academic exchange and deep collaboration with world-class institutions.