Beyond wear resistance and durability ...

When people talk about coating, they are primarily interested in coating for decoration, such as colour, or for tribological applications, that is, providing a hard surface which is resistant to wear and corrosion. "But this is only one part of coating," said Professor Haydn Chen, Chair Professor of Materials Science and Head of the Department of Physics and Materials Science (AP). Other examples of coating are transparent coating with good scratch resistance, which is used to coat expensive watches; transparent and conductive coating for solar cell and TV screens; thin films or semi-conductive films for making circuits or sensors; and ceramic coating in micro electronic mechanical systems (MEMS) to convert electricity into mechanical force.

In addition to their joint projects with the Department of Manufacturing Engineering and Engineering Management (MEEM) on tribological applications under the aegis of the Advanced Coatings Applied Research Laboratory (ACARL), scientists in the AP Department also work on other areas of coating technology, particularly in the wider area of coating/thin film: layering one material on another type of material for different kinds of applications beyond tribological and decorative purposes.

A history of coating research

The AP Department has a long history of research in coating. In 1995, the Department set up a Super-Diamond Laboratory to carry out research in the science and technology of diamond-like carbon coating (DLC). Four years later, the Laboratory evolved into the Centre of Super-Diamond and Advanced Films (COSDAF), one of CityU's six University-level research centres, to deal with research in diamond coating, super hard thin films, organic electroluminescent display (OLED) materials and devices, and nano-scale materials. The Centre, led by its Director Professor S T Lee, Chair Professor of Materials Science, has seen several innovative developments since its establishment. These include methods for depositing DLC coatings with high optical transparency in a visible wavelength region and for synthesizing nano-

smooth DLC films with desirable hardness, wear and scratch resistance. It has also developed a new and novel technique, the oxide-assisted synthesis process, to synthesize high-purity and bulk-quantity nanowires and nanosphere chains of silicon and other materials. And it has worked with local manufacturers to produce scratch-resistant protective coatings for use on watch faces, camera lenses and magnetic disks. Professor Lee has an international reputation in the field of diamond research and nanomaterials. In recognition of his achievements in science, the Alexander von Humboldt Foundation in Germany conferred a Humboldt Research Award on him in 2001. He was recently awarded the Second Prize in the National Natural Science Award 2002 for his contributions to diamond and nanotechnology research. For many years, his research projects have won government grants and support. In the recent 2002-2003 Research Grants Council central allocation, his project on organic electroluminescence received funding of HK$1.8 million, for the third year in a row.

Professor Yeshayahu Lifshitz , Chair Professor of Materials Science, has recently made a breakthrough that enables the fabrication of much smaller, denser and more powerful electronic devices capable of operating at high temperatures and in environments of very harsh radiation. Other applications include protective coating for optics, hard coating for cutting tools, drills, sliding parts and bio-implants, as well as sensors and electrodes for electrochemical applications. 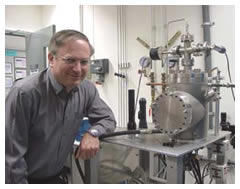 A research team led by Professor Paul Chu , Chair Professor of Materials Engineering in the Department and Director of CityU's Plasma Laboratory, has developed a technique that offers the medical world a cost-effective method of enhancing the biocompatibility of materials used in implants and a number of other orthopaedic and orthodontic procedures that depend on bio-integration. The technique-Plasma Surface Modification (PSM)-helps modify the surface properties of the bulk material and thus avoids inefficient implants. Professor Chu was elected Fellow of the IEEE in November 2002 for his contributions to the understanding of plasma implantation and deposition.

Professor Chen himself focuses on phase transformation, surfaces and interfaces of thin films, superhard coatings and ceramic coatings, which include electrical ceramics and bioceramics, all of which are essential to maintain and improve our daily lives. For example, Professor Chen has recently developed sol-gel deposition and metal organic chemical vapour deposition (MOCVD) techniques to fabricate high-quality ferroelectric and anti-ferroelectric thin films for applications as capacitors, sensors, actuators, transparent conducting electrodes, etc. He is Fellow of ASM International, Fellow of the Hong Kong Institution of Engineers, Member of the New York Academy of Sciences and is also a recipient of the Humboldt Research Award. 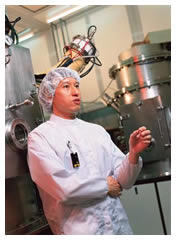 In addition to research, AP has also established the Materials Micro-analytical Characterization and Testing Services (M2CTS) in July 2002, part of the CityU Shenzhen Applied R&D Centres located in the Shenzhen Virtual University Park. M2CTS aims to provide expertise and knowledge in the areas of microanalysis of materials and testing for industries in Hong Kong, Shenzhen and the Pearl River Delta to help advance their knowledge and enhance their competitiveness. Coating services are included in the services and facilities that cover microstructure characterization, testing/measurement laboratories and processing laboratories.