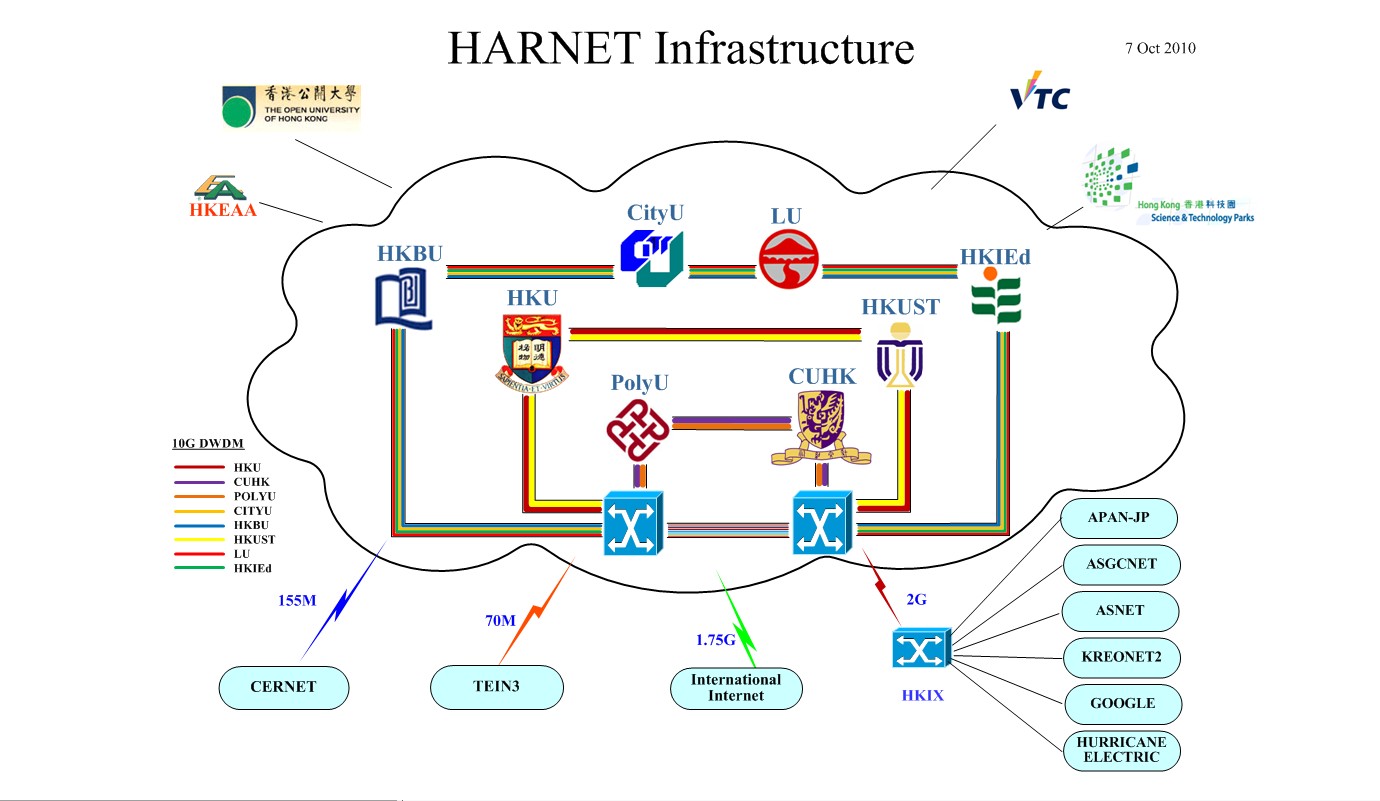 The Hong Kong Academic and Research Network (HARNET) is the wide-area network that links the campus networks of the eight tertiary institutions in Hong Kong and connects them to the Internet, the TEIN2 and other research and academic networks.  The HARNET is managed by the Joint Universities Computer Centre (JUCC), a consortium of eight UGC-funded institutions.  The HARNET also provides Internet connectivity to JUCC’s affiliate members and network members, including the Open University of Hong Kong, Vocational Training Council, the Hong Kong Examinations and Assessment Authority and the Hong Kong Science and Technology Parks.

The HARNET currently rides on the Optical HARNET, which is an optical network provisioned as a managed wavelength service by a local carrier.

A series of upgrades were conducted on both the HARNET and the Optical HARNET in last year.

The HARNET was migrated to a new service provider for its Internet connectivity and central router management in March 2010.  The following summarizes the changes and upgrades which have been performed:

The International commodity Internet bandwidth was upgraded from 1.2 Gbps to 1.5 Gbps in March 2010.  It was then adjusted down to 1.0 Gbps in June 2010 due to low Internet traffic in Summer Holidays and upgraded to 1.75 Gbps in September 2010 in anticipation of high Internet traffic for the new academic year.

The local Internet connection to HKIX was also upgraded from 1 Gbps to 2 Gbps.

The HARNET forms direct peers with the following networks at HKIX:

The HARNET also peers with the CERNET (China Education and Research Network) and the TEIN3 (The Third Generation of the Trans-Eurasia Education Network) at Mega-Iadvantage, Chaiwan with bandwidths 155 Mbps and 70 Mbps respectively.

The HARNET HKIX router and the HARNET routers of the eight HARNET member institutions were upgraded to using 10G Ethernet for the local HARNET connections. 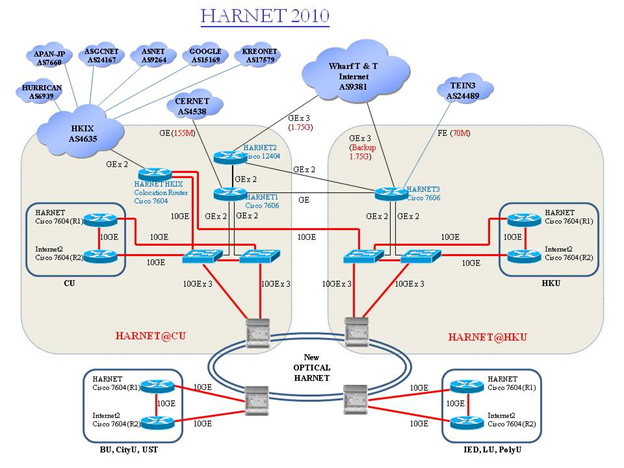 Along with the HARENT upgrade, the Optical HARNET was also upgraded in July 2010.

The old Optical HARNET consists of two 10G rings as shown below: 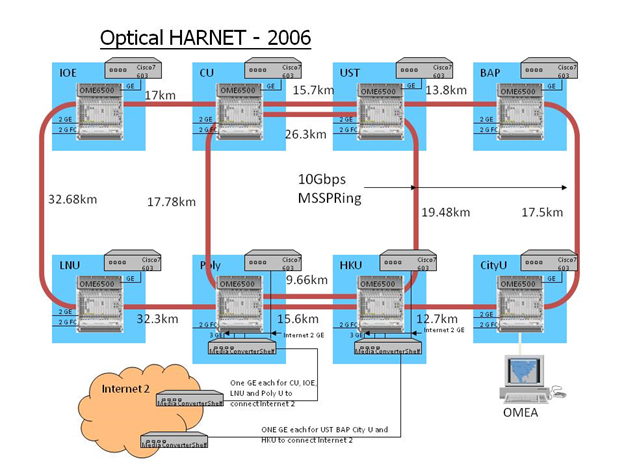 Although the optical nodes are capable of DWDM (Dense Wavelength-Division Multiplexing), the two 10G rings were actually implemented over 2 optical rings instead of using 2 lambdas (Wavelengths) over one single optical ring.  Since fixed-wavelength OADMs (Optical Add Drop Multiplexors) were used, additions and changes to the optical network were difficult, downtimes and service interruptions also could not be avoided for those additions and changes.  Each HARNET member was provisioned with 2 GE ports for the HARNET Internet connections.

Comparatively the new Optical HARNET is more advanced and more flexible. Each optical node supports DWDM with up to 40 lambdas (Wavelengths) out of box. A total of seventeen 10G rings (1 lambda for each) are implemented over three optical rings. Additional 10G rings (up to forty 10G rings for the optical network) can be provisioned on demand anytime without incurring service interruptions. The optical nodes of the HARNET members are eROADMs (enhanced Reconfigurable Optical Add Drop Multiplexors) while the optical nodes of the service provider which participate in the three optical rings are MD-ROADMs (Multi-Degree Reconfigurable Optical Add Drop Multiplexors). The following diagrams show the logical connections and the physical connections respectively. 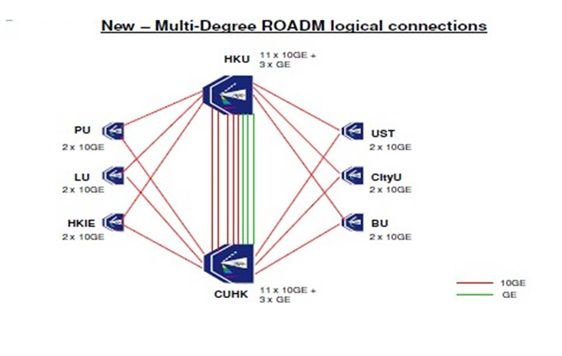