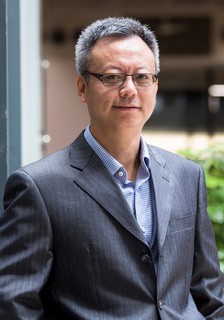 Keen to create a vast range of useful unconventional materials from almost anything, one of CityU's top chemists and nanotechnology scientists is happy for others to apply them usefully for the advancement of humankind.

Professor Zhang Hua, Herman Hu Chair Professor of Nanomaterials in the Department of Chemistry, is devoted to searching for the unique properties and unconventional structures of materials at the nanoscale level.

For Professor Zhang, what is particularly interesting about nanomaterials is the fact that compared to bulk materials, their properties and crystal structures could change dramatically. To the ordinary person, they change beyond recognition, and their potential applications are widespread.

Professor Zhang can easily identify numerous applications of nanomaterials, including catalysis, clean energy and water remediation, thanks to their use in biomedicine, functionalized nanomaterials can be used as carriers to achieve targeted drug delivery and controllable release for better drug effects, in semi-conductors and electronics, and even in robotics. The list of potential uses is endless.

Professor Zhang has nearly 15 years of independent research experience in the fields of chemistry, materials science, and in particular, nanomaterials. He is a Fellow of the Royal Society of Chemistry (2014) and an Academician of the Asia Pacific Academy of Materials (2015), and was elected Foreign Fellow of the European Academy of Sciences in 2020. He has published over 500 papers, which have caught the attention of fellow researchers in some of the world's most prestigious institutions.

In recent years, Professor Zhang has focused on the synthesis and applications of nanomaterials with unconventional phases. He is a world-known leader in the development and promotion of this unique field. He is especially proud of his paper "Phase Engineering of Nanomaterials", or PEN in short, which was published in this year's London-based Nature Reviews Chemistry. In his infinitely small materials world, Professor Zhang constantly sees new, imagined fields where "nothing is impossible."

One can easily connect Professor Zhang's research on nanomaterials to the key research area of Matter. "Nanomaterials are one of the most key factors for the advancement of research and technology in a wide range of fields, from the environment to healthcare, and from semi-conductors to smart city," he said. "Nanomaterials are actually everywhere."

He said he is proud of the rapid progress of CityU and its achievements in world-class research, with multiple disciplines ranking among the leading institutions in the world.

Professor Zhang said he was honoured to be offered the Herman Hu Chair Professorship in Nanomaterials and thanked Ryoden Development Charitable Trust for supporting the Named Professorship Scheme. "The Scheme offers much-needed resources for research, fuelling creativity," Professor Zhang said, adding that as institutions where people exchange ideas, universities around the world need constant creativity if they are to make long-term progress.

"Thanks to the University's fundraising efforts and the generous donations from supporters, we can be sure of the continuity of cutting-edge research projects at any given time. The Scheme has allowed me to work with excellent researchers." Professor Zhang said. He wished to express his appreciation to the donors with fruitful research and contribution to CityU, society and humanity.