by Simpson Wong
SHARE THIS
PC Hardware
Further to the PC upgrade last year, the remaining half of the CSC Teaching Studio Areas, around 500 PCs, have been upgraded to newer hardware this summer. These PCs are also configured as diskless start-ups with Citrix Provisioning Services (PVS). The computers boot up from the network and read the virtual hard disk content from PVS servers on the fly.  As the write operations are cached on the device RAM temporarily, users are advised to save their working files on removable storage devices, such as USB flash drive and USB HDD/SSD. Besides the USB 3.0 ports, there is also an USB 3.1 Type-C port on each new PC which can support faster USB devices at a speed up to 10 Gbps. In order to provide a larger write-cache and more working memory for Windows 10 (64-bit), both the old and new PCs have been upgraded to 64GB of RAM.
CSC Teaching Studios which have been upgraded this year (2017) are:
CSC Teaching Studios which had been upgraded last year (2016) were:
Operating Systems
The Windows 10 (64-bit) system has been upgraded to version 1607, while the Windows 7 (32-bit) system will still be available for some time. For PCs using Citrix PVS, a black & white character-based Boot Menu (shown below) will be displayed upon startup. Users may either input “1” and press <Enter> key to select Windows 10, or input “2” and press <Enter> key to select Windows 7. 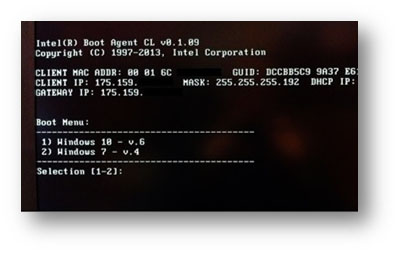