Virtualization is an irreversible trend in the IT industry. It brings great benefits to enterprises by allowing better utilization of IT resources, simplifying IT administration, facilitating faster disaster recovery. For more discussion on its benefits, please refer to an earlier article “Moving Forward with Client Virtualization” in Network Computing Issue 71 - March 2012.

The Computing Services Centre (CSC) has decided to deploy some selected virtualization technologies for improving the teaching and learning environment. They are: the server virtualization for the student printing services, the virtualization of application provisioning in the CSC Teaching Studios, and outsourcing (public cloud) the student email service to Microsoft Office 365.

Coming up, the CSC will also implement client virtualization (which virtualizes the desktop computers) in the CSC Teaching Studio Areas. As a pilot, two implementation approaches will be used:

Desktop computers using VHD require reliable network connections, sufficient disk storage and processing power for downloading and running the VHD images. But apart from that, there will be no need for the time and work for performing individual operating system patches and software upgrades. The time saving will be most valuable when competing with the urgent time required for applying newly released OS patches to protect the 1000 desktop computers in the CSC Teaching Studio Areas against zero-day malware attacks.
VHD has been used for over half a year for administering the Express Terminals scattered around the campus. In the coming April 2014, VHD will be extended to administer some desktop computers in the CSC Teaching Studio Area. It has been planned to virtualize 120 desktop computers in one open access area and one Teaching Studio.  The supporting infrastructure is illustrated in the diagram below. 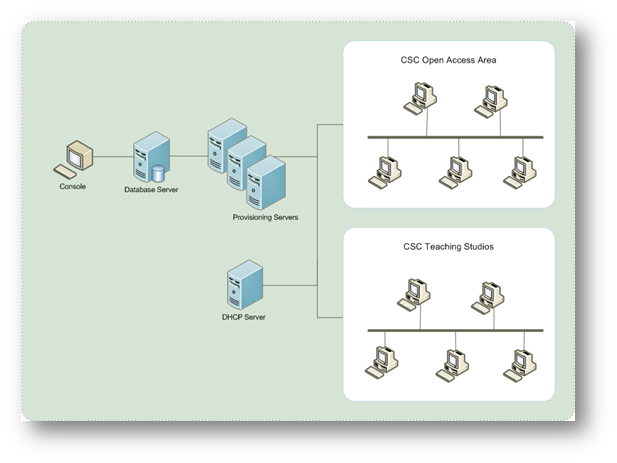 For more information on the implementation of client VHD, please refer to an earlier article “Client VHD Implementation of Express Terminals” in Network Computing Issue 77 - September 2013.
(2)   Hosted virtual desktop infrastructure (VDI)
With VDI, the entire system including the operating system, software applications, user settings and user data, are all stored and run under an emulated environment (virtual machine) hosted on a physical server. This implies that the system is totally server dependent.  The screen images for interfacing with the user including mouse clicks, keystrokes and result display are transmitted between the hosted virtual machine and client devices (e.g. PCs, tablets). As such, the VDI is less dependent on the make and performance of the client device and therefore, apart from notebook PCs, it can be run on a variety of mobile devices and operating systems (for example, iOS and Android) that can connect to the virtual machines via the campus wireless LAN, nevertheless, the demands for reliability and bandwidth on the campus wireless LAN infrastructure will be substantial.

The CSC is now piloting VDI and is building the disk images of the virtual machines based on the Student LAN, meaning that VDI users will be able to access Microsoft Windows and some general software e.g. MS Word, Excel, PowerPoint, etc. from their notebook PCs as well as iOS and Android tablets as if these devices are locally connected to the Student LAN. The diagram below illustrates the infrastructure for the VDI pilot. 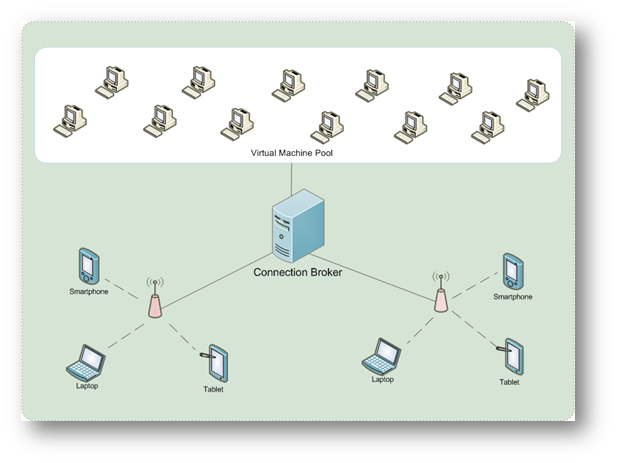 Future implementation of virtual desktop will depend on the pilot results. It may be a mixture of both approaches, each targeted to serve a different or specific requirement.
References