by Joe Lee
SHARE THIS
The Student Notebook Computer Daily Loan Scheme (DLS) has been established for more than 10 years (previously known as the Mobile Computer Service) to give students the convenience and flexibility to make use of the wireless network to access the campus network and the Internet, facilitating their learning and academic activities. When the Computing Services Centre (CSC) was moved from Academic 1 (AC1) to Academic 2 (AC2) in August 2012, the new DLS counter was set up on the 4/F of AC2 to provide 600 Lenovo X200 notebooks for loan to students.  As AC2 is a bit remote from AC1 while the building works of Academic 3 (AC3) were still underway then, we had expected the usage to drop due to inconvenience.  Nevertheless, there was still a 3% increase in notebook loans in 2012-13.  In addition, we observed that there was a change in the usage pattern.  We took remedial measures immediately to cope with the change and maintained a satisfactory service that year.
According to the observations in 2012-13 and taking into account the full operation of AC3, we anticipated there will be a further increase in DLS usage in 2013-14.  In fact, the usage shows that the usage pattern follows more or less the same in Semester A 2013-14.

When comparing the number of loans by timeslots in Semester A (September - November) from 2010-14, we noticed that there was a longer period of peak running from 11am to 3pm after moving to AC2.  Hence, we have recruited more student helpers to assist our staff so that all 3 service windows can provide DLS service in parallel throughout this period. 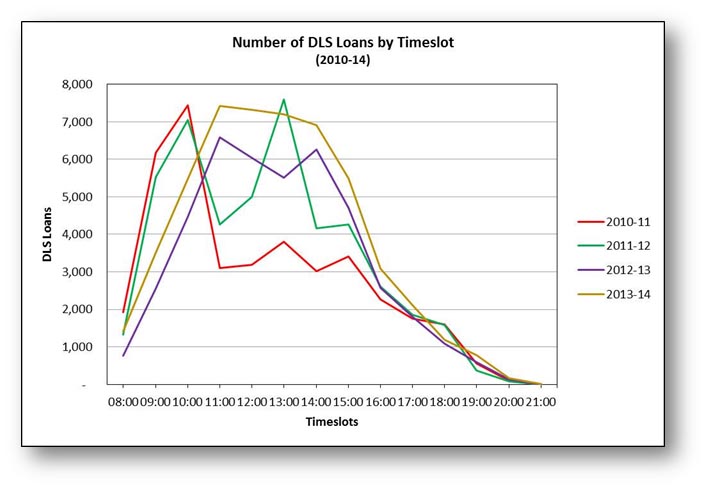 Among all local universities, only CityU provides the DLS service.  It is well-received and has played a significant role in e-learning.
With various schemes assisting and encouraging students to have their own mobile computing devices, almost all students now possess one or more mobile devices types. As the effectiveness of the e-learning now relies on the continual and private use of students’ own devices, unlike the nature of the use of the DLS notebooks which is now meant for casual or occasional use, students are thus encouraged to bring their own devices back to campus to make their studies more productive.
It is obvious that the DLS service has changed its primary role from an initiative for promoting m-learning to a service of supplementary nature for the support of students’ emergency and casual uses, it is anticipated that the DLS will be scaled down in the near future and eventually be terminated.