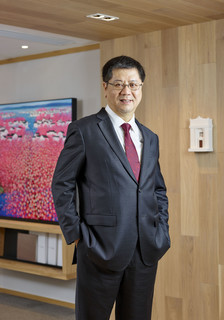 As the Executive Director, Chairman and Chief Executive Officer of Top Spring International Holdings Limited, Mr Wong’s unyielding character is probably inherited from his family. His parents, Mr Wong Cheung and Mrs Wong Lo Hui-yuet, together with dozens of their siblings and relatives joined the anti-Japanese guerilla force called the Hong Kong-Kowloon Brigade of East River Column, which fought the Japanese in a number of battles and rescued more than 700 renowned intellectuals and over 80 British and US prisoners of war.

Deeply impressed by the courageous behaviour of his parents and relatives during the war, Mr Wong has developed a positive attitude towards life. Hence, he highly appreciates that CityU pursues excellence in education.

“About five years ago, I came to know CityU through a friend,” he said. “The CityU community members whom I contacted all showed their deep appreciation for the University and their dedication to their jobs. Therefore, I was pleased to become a member of the University. I feel proud of CityU for its rapid advancement.

Mr Wong has generously made donations of more than $100 million over the past 30 years to a variety of causes. These gifts were used mostly for education, including sponsoring students experiencing financial difficulties, nurturing village teachers and funding libraries in mainland China.

“Education has a significant impact on young people, not only affecting the life of an individual but also the lives of their families,” he said. In appreciation of his contributions, the Hong Kong government awarded him the Bronze Bauhinia Star in 2016 and the Guangzhou municipal government conferred him the title of Honorary Citizen of Guangzhou in 2018.

Mr Wong also shared his philosophy in facing difficult times with his business. During the global financial crisis, his company assets were significantly reduced by more than 90% and the situation was very turbulent, but with his integrity and perseverance, he finally overcame the adversity and led the company to achieve greater success!

Albeit with a heavy workload, he insists on reading books and newspapers and taking courses to learn more. He encourages young people to study history as reviewing the past can help broaden one’s vision.