The hottest new term in the Pan-Chinese media is “Stop violence and end disorder”, according to the 2019 LIVAC Pan-Chinese New Word Rosters released by City University of Hong Kong (CityU), while “Xi Five-Points”, “Yellow Shop (Blue Shop)” and “Han Fan Troops” were respectively the top new words in Beijing, Hong Kong and Taiwan.

The rosters are based on the LIVAC Synchronous Corpus in Chinese developed by Professor Benjamin T’sou Ka-yin, Emeritus Professor of CityU’s Department of Linguistics and Translation.

They are based on the frequency of new words in Chinese-language newspapers in the Pan-Chinese region. The following table shows the five most representative new words and each of the three regions: 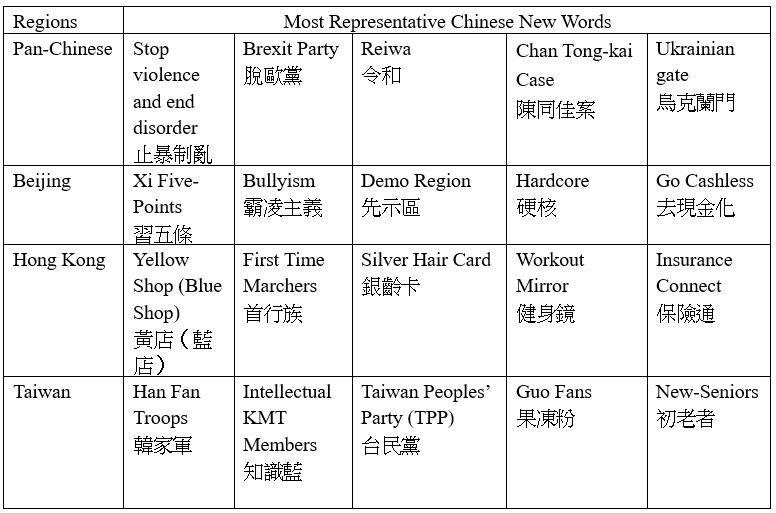 These new terms and words, which emerged out of the political and social events in the Pan-Chinese region during 2019, provide useful social and cultural indicators, according to the LIVAC team.

“The new words appearing in the Beijing, Hong Kong and Taiwan rosters are concerned with political changes in their own regions and around the world,” Professor T’sou said.

The new term “Stop violence and end disorder” refers to the recent social unrest in Hong Kong which were triggered by the “Chan Tong-kai Case” and which drew the most media attention in the Pan-Chinese region.

“Brexit Party” focused on the controversial issues surrounding Britain’s exit from the EU. The unprecedented abdication of Emperor Akihito of Japan, which brought Crown Prince Naruhito to the Chrysanthemum Throne in the new “Reiwa” era, was well noted, too. The media also focused on US President Donald Trump’s alleged influence over aid to Ukraine.

Of the five top new terms in the Pan-Chinese Region, three are concerned with events in Europe, Japan and the US, while two are concerned with the recent social movements in Hong Kong. The significance of this imbalance is borne out by the 2019 LIVAC Pan-Chinese News Media Personality Roster released on 7 January in which seven of the eleven personalities spoke out on Hong Kong events compared with only four speaking out on the on-going US-China trade war.

The LIVAC New Word Rosters are based on an analysis of print media materials processed by the LIVAC (Linguistic Variations in Chinese Speech Communities) database, which systematically analyses language used by the media in the Pan-Chinese region, including Beijing, Hong Kong and Taiwan.

The database has analysed over 600 million words from the major press outlets in the Pan-Chinese region since 1995, and has accumulated nearly 2 million words in the LIVAC dictionary.

The relevant meaning and background information on the new words can be found in the appendix (in Chinese only) and the website http://www.livac.org.