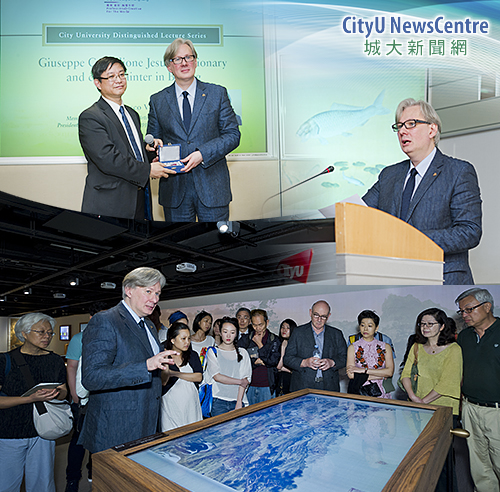 An Italian art historian delivered a distinguished lecture on Giuseppe Castiglione’s paintings and led a guided tour of the “Giuseppe Castiglione---Lang Shining New Media Art Exhibition” at City University of Hong Kong (CityU) on 25 May.
The speaker, Dr Francesco Vossilla, is a Member of the Accademia delle Arti del Disegno di Firenze. He said that Giuseppe Castiglione (1688-1766) bridged Italian sensibility with Chinese themes to serve the imperial court as well as to support the Jesuit mission in China.
His lecture was titled “Giuseppe Castiglione: Jesuit missionary and court painter in Beijing”.
Dr Vossilla said that Castiglione, known as Lang Shining in China, was relatively low in the hierarchy of the Society of Jesus, but while he was in Beijing he played an important role in the history of cultural and diplomatic relationships between China and the West.
Dr Vossilla is the President of the Società di Studi Giuseppe Castiglione-Lang Shining, which is dedicated to intercultural studies and named after the great Jesuit artist. He is also Honorary Professor to the President of Fu Jen Catholic University in Taipei.
After the lecture, Dr Vossilla led a guided tour of the Castiglione exhibition with Chair Professor Jeffrey Shaw of CityU’s School of Creative Media. Dr Vossilla said new media had made Castiglione’s artwork more appealing and interesting. The exhibition was co-organised by CityU and the National Palace Museum, Taipei.
Dr Vossilla also presented CityU with a new book Giuseppe Castiglione: Jesuit and Painter in the Celestial Empire, which is a collection of academic studies on the great Italian artist and his artwork.