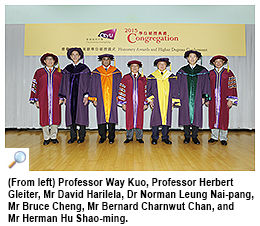 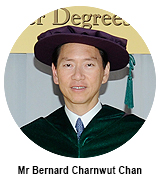 Mr Bernard Charnwut Chan, President of Asia Financial Holdings Ltd and Asia Insurance Co. Ltd, received an Honorary Doctor of Social Science. Mr Chan has been an active participant in public service and is now a deputy to the National People’s Congress of China, a non-official member of Hong Kong’s Executive Council, Chairman of the Advisory Committee on Revitalisation of Historic Buildings, the Committee on Reduction of Salt and Sugar in Food, and the Steering Committee on the Restored Landfill Revitalisation Funding Scheme, and the Chairperson of the Hong Kong Council of Social Service. Mr Chan is also the Chairman of the Hong Kong - Thailand Business Council, which encourages the development of trade and investment between the two places and the growth of Hong Kong and Thailand as gateways to their respective hinterlands in the Pearl River Delta and Mekong Region.

He was a former member of Hong Kong’s Legislative Council from 1998 to 2008, Chairman of the Standing Committee on Disciplined Services Salaries and Conditions of Service from 2001 to 2006, Council Chairman of Lingnan University from 2008 to 2014, Chairman of the Council for Sustainable Development from 2009 to 2015, and Chairman of the Antiquities Advisory Board from 2009 to 2012. He was appointed a Justice of the Peace in 2002 and awarded the Gold Bauhinia Star in 2006 by the Hong Kong SAR Government for his contributions to Hong Kong. In 2004, he was appointed a Commander (3rd Class) of the Most Noble Order of the Crown of Thailand. 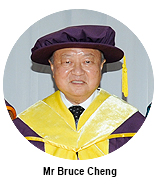 Mr Bruce Cheng, Founder and Honorary Chairman of the Delta Group, received an Honorary Doctor of Engineering. Mr Cheng has been dedicated to saving energy and improving the environment. Under his leadership, the Delta Group has become a global leader in power management and thermal management solutions with a corporate mission “To provide innovative, clean, and energy-efficient solutions for a better tomorrow.” In 1990, Mr Cheng set up the Delta Electronics Foundation for which he provides sole funding. The Foundation has sponsored and taken part in various environmental protection activities, including the promotion of conservation education, fostering the development of sustainability technology and green buildings, and nurturing professionals in related fields. In recognition of Mr Cheng’s contribution to environmental sustainability, the International Astronomical Union named Asteroid 168126 “Chengbruce” in 2008.

Professor Herbert Gleiter, Zijin Chair Professor and Director of the Herbert Gleiter Institute of Nanoscience at Nanjing University of Science and Technology, received an Honorary Doctor of Science. Professor Gleiter obtained his PhD in physics from the University of Stuttgart in 1966. During his work at Harvard University and the Massachusetts Institute of Technology, he discovered the existence of dislocations in inter-crystalline interfaces and proposed the structural unit model of grain boundaries, which provides the basis for today’s grain boundary models. In the late 1970s, he pioneered a new class of materials: nano-crystalline materials. The idea of these new materials was to create solids consisting of a large volume fraction of inter-crystalline boundaries between crystallites with the same or different chemical compositions. As the arrangements of atoms in interfaces differ from the ones in crystals and glasses, nano-materials were expected to open the way to solids with new atomic structures and hence new properties.

Professor Gleiter’s contributions have been cited more than 22,000 times and have achieved the highest citation impact score in Materials Science in Germany and are number two in Europe. Throughout his career, he has received more than 40 prizes and awards, including the Leibniz Prize, the Max Planck Research Award, the Acta Materialia Gold Medal, and the Edward DeMille Campbell Award. He is a member of seven National Academies and awarded several honorary professorships and doctorates. Nanjing University of Science and Technology founded a new research institute working on nano-science named after him and appointed him Founding Director of the Herbert Gleiter Institute of Nanoscience. 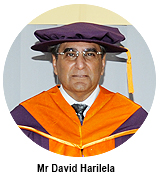 Mr David Harilela, CEO of the Harilela George Limited group of companies, received an Honorary Doctor of Business Administration. Born and raised in Hong Kong, Mr Harilela graduated with a degree in Business Administration at the University of Southern California. After graduating, Mr Harilela launched his own trading business under the name Harilela George Limited, a vehicle which he used to launch and secure the first international multi-category license for the World Cup (a first-ever by an Asian company) for Europe, Africa, the Middle East and Mexico. Today he manages the family trading business in addition to his licensing, franchising, manufacturing and exporting businesses. He is also the director of Harilela Hotels Limited.

Mr Harilela is an active member of the Rotary International and the local Rotary Club of Kowloon Golden Mile. He was the District Governor of the Rotary International District 3450 from 2011 to 2012, and is now fully committed to his project, THE ONE, an annual international humanitarian award, with which he seeks to find and honour unsung heroes both internationally and in Hong Kong; who are doing good for and within the community. He is also a Past Director and currently Vice-Patron of The Community Chest of Hong Kong, Founder and Trustee of the George and Chandra Harilela Foundation, Trustee of the Kanya Daan Trust, and Co-Founder of the Indian Community Group.
151120-2_HonD_L.jpg In addressing the graduates in his note of thanks, Professor Gleiter thanked CityU for the honour and talked about the crucial factors for success in science, such as hiring people with great potential, letting them find their way and stimulate each other. To conclude his speech, he said, “Doing research in basic and/or applied science involves two remarkable facts. On the one hand, it is a great privilege. It allows us to focus on ideas that appear most attractive to us and to co-operate with people who attract us due to their intellectual profile and potential. On the other hand, research is a humbling endeavour, and failure is much more common than success. As Winston Churchill said, ‘Success is going from failure to failure without losing enthusiasm’.”
Mr Herman Hu Shao-ming, Council Chairman, and Professor Way Kuo, President, also attended the ceremony.
In his speech, Professor Kuo urged graduates from all discipline to seize the opportunities to help make the society more prosperous. “Your work in these fields, and across the disciplines, has definitely strengthened CityU’s performance. And now that you have finished your studies, I hope that your future careers will allow you to give something back to society. Now is the time to consider how you can use your knowledge, skills and discoveries to benefit the communities around you,” he said.
The 2015 Congregation was held from 10 to 20 November. This year CityU produced 7,900 graduates through its provision of quality professional education, comprising 266 doctor of philosophy degrees, 28 doctor of business administration degrees, 10 doctor of juridical science degrees, five engineering doctorates, seven master of philosophy degrees, 3,233 master’s degrees, 188 postgraduate diplomas/certificates, 3,806 bachelor’s degrees, and 357 associate degrees.