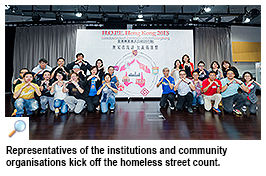 Around 400 students from City University of Hong Kong (CityU) and volunteers from other universities and community organisations chanted slogans together to signify the launch of Homeless Outreach Population Estimation Hong Kong 2015 (HOPE HK 2015).

HOPE HK 2015 will take place on the night of 29 October. Community organisations serving the homeless will join forces with university students to conduct a city-wide homeless street count.

The aim of the count is to collect an accurate and useful count of homeless people in the city, and use the information to lobby for appropriate and effective resources, as well as policy changes at both the individual and systemic levels to help homeless people get out of their destitute circumstances, with the support of community organisations. 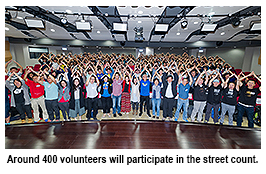 A kick-off ceremony was held at CityU on 16 October. Dr Elaine Au Liu Suk-ching, Convenor of the City-Youth Empowerment Project (CYEP), thanked the participating students for moving beyond their own concerns to caring about the less fortunate, and thanked the other institutions and community organisations for their support.

The street-count teams will be sent to different districts all over Hong Kong. Before the street-count action day, the volunteers attended a series of training workshops on skills for interviewing the homeless, and seminars on housing policy and homelessness issues in Hong Kong. 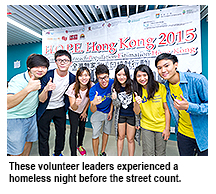 More than 30 of the volunteers even experienced a night on the street, collecting cardboard and building beds with it to experience the feeling of being homeless.

Rachel Lau Yik-lam, a Year 3 student in the Department of Applied Social Sciences, who joined the street experiential training, said: “It was an unforgettable experience. Before I joined this project, I didn’t realise that there were so many homeless people living in the streets. Now I know more about them and have become more concerned about them.”

The count was organised by CityU’s CYEP, together with groups from four other universities and four community partners: Christian Concern For The Homeless Association, Salvation Army, Society for Community Organization, and St. James’ Settlement.