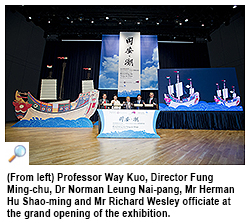 A new media art exhibition that brings to life sea-faring culture and the Qing Navy’s advancement during the 19th century is a unique collaboration between City University of Hong Kong (CityU) and the National Palace Museum (NPM) in Taipei. It marks a milestone in terms of cultural and art exchanges between Hong Kong and Taiwan.

The collaboration, titled “Rebuilding the Tong-an Ships New Media Art Exhibition”, signals the fruition of CityU’s pro-active industry in recent years, and represents the first-ever collaboration between a local university and NPM.

“Rebuilding the Tong-an Ships New Media Art Exhibition” will be held at Academic 3 at CityU from 15 August to 30 September. The famed Chinese pirate Cheung Po-tsai has been added to the exhibition to create stronger links to Hong Kong’s history. Admission is free and open to the public. 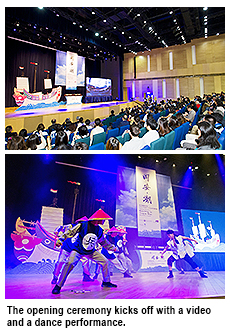 “The selection of CityU as NPM’s first collaborative partner in Hong Kong is recognition of the University’s achievements in the promotion of Chinese culture and the development of new media technology. This collaboration will inspire both sides to open up more areas for innovation,” said Mr Hu.

Professor Kuo signed a memorandum of understanding on behalf of CityU with NPM in October last year to promote cultural and art exchanges between the two places.

“The joint efforts in organising ‘Rebuilding the Tong-an Ships New Media Art Exhibition’ in Hong Kong will certainly create synergy. The event exemplifies CityU’s contribution to the promotion of Chinese heritage with its strengths in creative media,” Professor Kuo said. 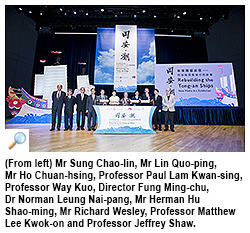 Director Fung said, “The sea-going spirit fostered a nation’s will to overcome obstacles, a desire to explore and discover, and a vision for the future. It is a major motivation behind the advancement of Chinese culture.”

She added that digital technologies were the future of cultural exchanges. “With the sea-going spirit close to our hearts, our curators have turned this exhibition into a wonderful feast of technology and humanism. Please come aboard to ride the waves with us,” she said. 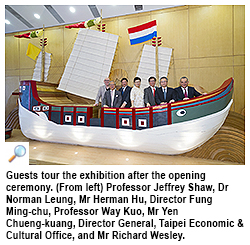 Tong-an shuttle ships built in Fujian Province during the mid-Qing Dynasty were used by merchants, the navy and pirates. Before the arrival of the steamship in China, they were the most representative sailing vessels in ancient China, helping to fuel a power struggle in East Asia’s seas.

The inspiration for the exhibition dates back to the two scale models of a Tong-an ship that featured in the “Voyage with the Tailwind: Qing Archival and Cartographical Materials on Maritime History in the National Palace Museum” exhibition produced by NPM in 2013.

The Hong Kong Maritime Museum has provided pictures of the ships and the Pacifying the South China Sea scroll to make this exhibition much more attractive.