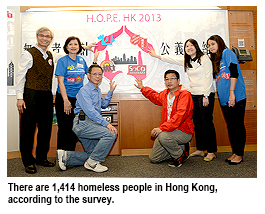 A lack of affordable housing is a major reason for homelessness, according to a city-wide street count in which students from City University of Hong Kong (CityU) participated.
It is estimated that 1,414 people were without a stable or permanent home in Hong Kong, according to Homeless Outreach Population Estimation Hong Kong (H.O.P.E. HK) as of August 2013.
A total of 214 out of 323 respondents (66%) reported not having enough income to cover their rent. Other causes for homelessness directly related to housing and affordability included attempting to save money, the inability to find housing with affordable rents, and substandard housing conditions.
The street count was organised by CityU’s university-wide volunteer programme, the City-Youth Empowerment Project (CYEP), together with community partners Society for Community Organization, the Salvation Army, and St James’ Settlement. 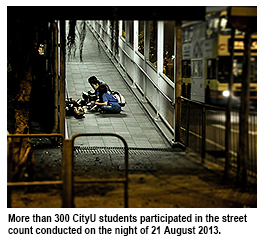 It was the first time in Hong Kong that community organisations serving the homeless had joined forces with a university service-learning platform to conduct a city-wide homeless street count.
More than 300 students affiliated to CityU participated in the street count on the night of 21 August 2013, covering close to 180 locations, such as night heat shelters and temporary/emergency shelters. Questionnaires and a supplementary observational count at around 70 24-hour chain restaurants in the following week were also conducted.
The findings showed that 720 people were homeless. Together with 415 people staying in shelters and urban hostels, and 279 empty bed spaces, the H.O.P.E street count estimated 1,414 people were without a stable or permanent home as of August 2013.
The findings further revealed that, contrary to the public image of the homeless, over 40% of street sleepers are self-supporting through low-paying jobs, and almost half do not rely on social welfare.
Unlike previous studies, the street count included the age of the respondents. About two-thirds of the homeless were 51 or older, indicating an ageing homeless population with challenging prospects for work. One-third of the respondents had serious or chronic health problems, and about one-third were suspected of having substance or alcohol abuse problems. 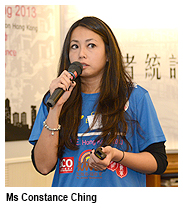 Ms Constance Ching Wing-lok, Project Supervisor of CYEP, said the H.O.P.E. street count results differed from the figures provided in the Street Sleepers Registry under the Social Welfare Department (SWD) as the registry did not record people who are without a permanent home or who stay in temporary shelters and urban hostels. (See table below.) Additionally, the total number of homeless people is believed to be an underestimation given the highly mobile nature of the homeless. 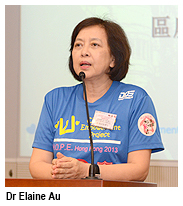 Dr Elaine Au Liu Suk-ching, Project Convener of CYEP, said homelessness in Hong Kong was severely under-researched, adding that she hoped the H.O.P.E HK street count would lead to a better understanding of the issues related to homelessness and make it easier to identify appropriate resources and preventative measures.
The participating organisations said additional city-wide street counts should be held regularly in collaboration with community organisations, community volunteers and other multi-party stakeholders because they would provide useful inputs for devising policies to help the homeless.
In addition, the participating organisations made the following suggestions:
1.      Extend the hostel service for the homeless (from 6 months to at least 3 years)
2.      Set up Assertive Community Treatment (ACT) teams and develop the psychiatric outreach service for the homeless
3.      Shorten the waiting period of public housing for single persons
4.      Develop comprehensive policies to address the homelessness issue
Statistics of the Street Sleepers Registry and H.O.P.E HK street count