​
The Confucian tradition teaches us important lessons about the music in and of our lives, argued Professor Philip J Ivanhoe in his talk at the latest President’s Lecture Series: Excellence in Academia, which took place on 21 January. 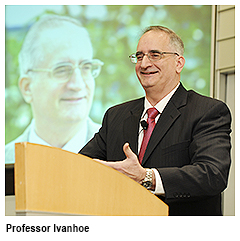 The title of the talk was “The Contemporary Significance of Confucian Views about the Ethical Values of Music”, and in it, Professor Ivanhoe, Chair Professor of East Asian and Comparative Philosophy and Religion in the Department of Public Policy, and Director of the Centre for East Asian and Comparative Philosophy, argued that ideas regarding music found in the ancient Chinese tradition still had “legs”, i.e. are relevant to the challenges and features of contemporary society.
Professor Ivanhoe began by pointing out that there were two main aims to his research work. As a historian, he attempted to deliver charitable and powerful readings of the past, a role he described as descriptive; and as a philosopher, he endeavoured to relate these readings to contemporary thought, such as ethics, a role he described as constructive.
In his readings of the Chinese classics, particularly the work attributed to Kongzi, or Confucius, Professor Ivanhoe claimed we could learn, or at the least reflect upon, much about the role that music plays in society, especially in terms of the values it imparts and its influence over people’s feelings.
“Music was profoundly important in early China,” he said. “Early Confucians taught that the songs the people of a state most enjoyed listening to and singing revealed deep and important things about the character of the people and the future prospects of the state.” Music could elicit profound emotions and was thought to have the power to diagnose the state, i.e. the level of well-being, of a society. 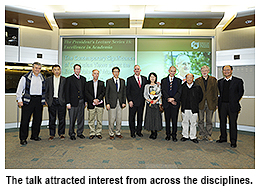 This meant, by logical inference, that bad music was probably bad for society and should be restricted and even banned. After all, according to Professor Ivanhoe, the Confucian vision of the ideal society has been likened to a great symphony orchestra: “an organisation in which one participates to create beauty and harmony beyond the capacity of any single individual”. And bad music could result in discord, which would not benefit the people.
“Because Kongzi believed that music was a powerful inculcator of values, he not only advocated the performance and appreciation of certain kinds of music but also argued that bad or harmful music should be banned and eliminated,” he said.
Professor Ivanhoe related this thought to more recent times, giving examples of how rock music on national US television in the 1960s was censored, too, citing infamous examples involving The Rolling Stones and Elvis Presley being perceived as dangerous lyrically and morally by the producers of the iconic US variety programme, The Ed Sullivan Show.
Bringing the discussion to today’s world of popular music, Professor Ivanhoe suggested that, while not exactly promoting the idea of direct censorship, Kongzi’s thoughts might lead more people to speak out against and condemn stupid, vicious, callous, selfish, or shallow music, especially that which contained racist or bigoted language, or advocated violence.
“Perhaps we should at least shield the young and those who do not care to be bombarded by such music and the malignant influence it carries by regulating the availability of certain music and restricting its play in public spaces,” he said.
Since most societies restrict access to pornography, for instance, “A blanket refusal to consider similar policies in the case of music seems to express nothing more than a prejudice against one sense—the visual—over another—the aural,” he concluded.
Professor Ivanhoe’s work has received a great deal of funding from international agencies, recently securing a HK$2.5-million grant from the Templeton Foundation for a project entitled “Eastern and Western Conceptions of Oneness, Virtue, and Human Happiness”.