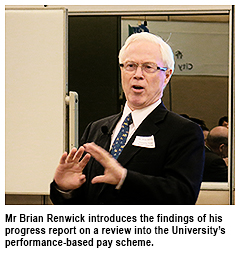 Heads of department and other senior staff reviewed the Performance-based Pay Review (PBPR) Scheme and debated issues surrounding the effective management of conflicts of interest during a half-day workshop on 15 March at City University of Hong Kong (CityU).
The first part of the workshop was devoted to reviewing a progress report on the PBPR conducted by Mr Brian Renwick, a managing partner of Boyden Management Consulting Asia Ltd.
During his presentation, Mr Renwick, who has over 30 years’ experience working in human resources management in Hong Kong, commended CityU for adopting a performance-based pay review scheme, concluding that the scheme had broad support across the University and would benefit from a period of stabilisation and modification over the next few years.
“The views expressed during the consultation process suggest that most people at CityU support the principle of performance-based pay and believe that the current scheme that CityU has implemented has provided focus,” he said.
He offered a number of recommendations for improving the scheme, ranging from increasing the level of training for both appraisers and appraisees, mandating personal interviews with members of staff, and reviewing the rating levels used in the scheme. 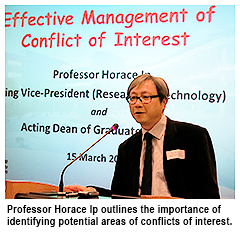 During the consultation process, Mr Renwick and his team collected feedback from 80 CityU academics and staff at 11 meetings and six focus groups. A report would be delivered to CityU in due course, he said.
Based on his findings, Mr Renwick said a genuine desire among CityU academics and staff to enhance the University was evident around campus, and it was important that CityU made the most of this source of goodwill.
Mr Renwick also assured the audience that concerns about the CityU scheme among employees were not uncommon in other comparably large organisations. He said such salary schemes were often perceived as overly bureaucratic and time-consuming, but nevertheless he cautioned that it was important for managers to devote plenty of time and patience to such a challenging enterprise since employees’ careers were at stake.
“No system is perfect,” Mr Renwick said. “But CityU has made the right decision to implement such a scheme. What is needed now is a period of stabilisation so that we can see what needs to be improved and how,” he said.
The PBPR scheme was approved by the Council in 2009 and 2010 respectively. Full implementation of the scheme was launched in the 2010–11 pay review cycle, following a trial run in 2009–10. The first pay increases under the PBPR were effective from January 2012.
The second part of the workshop dealt with issues arising from potential conflicts of interest among academics and support staff during the course of their work.
Professor Horace Ip Ho-shing, Acting Vice-President (Research and Technology), highlighted the need for managers to remain vigilant about the potential for a conflict of interest. He said CityU ran around 2,000 research projects each year, some several years in length, and that money used for these projects came mainly from the public purse.
A high level of accountability was therefore required in order that the public retained confidence in CityU, he said. 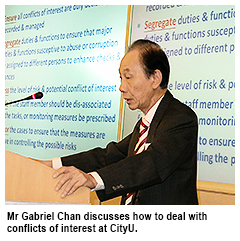 In his presentation, Mr Gabriel Chan Sai-man, Chief Administration Officer, agreed on the need to be aware of the possibility of such conflicts, adding that it was possible to get into difficulty by accident if you were not aware of the relevant rules and policies.
Referring back to CityU’s Strategic Plan 2010–2015, he stressed that the University’s core values of openness, accountability and high ethical standards had to be evident in all recruitment and procurement practices. These values had to be considered when receiving gifts and invitations, too, since such practices might be interpreted as means of seeking influence.
“We have codes of conduct concerning conflicts of interest and it is important that they are observed so that we can protect the reputation of the University,” he said.
This was the third such workshop for senior management organised by the Human Resources Office over the past three years.