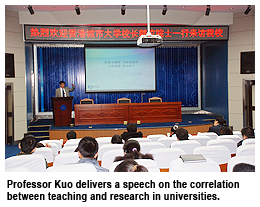 From 20 to 22 January, a City University of Hong Kong (CityU) delegation led by University President, Professor Way Kuo visited snowbound Lanzhou University. Their visit was at the invitation of Professor Zhou Xuhong, President of Lanzhou University and Member of the Chinese Academy of Engineering.
To kick off the visit, Professor Kuo and Professor Zhou had a detailed discussion on collaboration between the two universities and they agreed to enhance collaboration on research, exchange of undergraduates and nurturing of postgraduates.
Professor Kuo also delivered a speech to teachers and students at Lanzhou University, titled “Clarifying some myths of teaching and research in universities”. With extensive statistical data and meticulous analysis, he clearly explained the complementary and interactive relations between teaching and research, and provided the audience with new insights on these two most important, yet seemingly exclusive, issues. Professor Kuo’s enlightening points aroused the audience’s interest and, due to overwhelming response, the speech was extended from the scheduled one hour to two and a half hours. 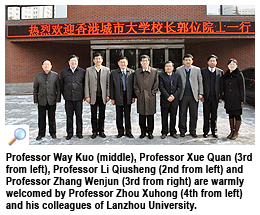 Members of CityU’s delegation included Professor Xue Quan, Associate Vice-President (Innovation Advancement and China Office); Professor Li Qiusheng from the Department of Civil and Architectural Engineering; and Professor Zhang Wenjun from the Department of Physics and Materials Science.
Lanzhou University, with a history of more than 100 years, is situated in the western region of mainland China. It is one of the key universities categorised under the national “Project 985”. It also plays a pivotal role in China’s development strategy of the northwestern region. Over the years, Lanzhou University has produced more than 100,000 professionals in various fields. Many of its graduates have become prominent experts and academics as well as senior government officials and business executives. Since 1999, 11 of its alumni have been elected members of various Chinese academies.
​