Students and faculty from the School of Creative Media (SCM) have performed strongly in international and local art awards.

Eason Tsang Ka-wai, a Year 3 SCM student, won the Yellow Pencil Award from the D&AD Student Awards organised by Design and Art Direction, a British educational charity promoting excellence in design and advertising. His winning photo series called “Landmark” contains upshot images of Hong Kong buildings.
“I wanted to change the perspective of viewing Hong Kong. Most of the photos were taken at night to create a stage effect, with the focus on the buildings themselves,” he said.
The international D&AD Awards are regarded as one of the most prestigious awards for design and advertising. Eason is the only Yellow Pencil awardee in the student category from Hong Kong.
Eason has received a number of awards, including the Silver Award and Hong Kong Best Award in a global design competition organised by the Hong Kong Designers Association in 2011. 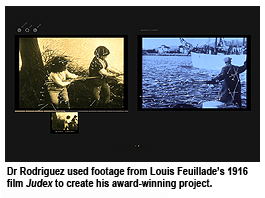 Meanwhile, in the recent Hong Kong Contemporary Art Awards (HKCAA) 2012, Dr Hector Rodriguez, Associate Professor in SCM, won an Achievement Award with his video art project Gestus: Judex.
“Gestus is a moving image processing framework that uses techniques from statistics and computer vision for both artistic creation and conceptual experimentation,” Dr Rodriquez said. The work has been shown in Athens, Greece; Taipei, Taiwan; and, in a different version, New York, US. It has also been accepted for SIGGRAPH Asia 2012.
“The project consists of an archive of moving images that depict body gestures. A movie has been digitally processed using a custom software that analyses its movements, compares them with the motion content of other sequences in the movie, and uses this information to re-edit the movie,” he said. 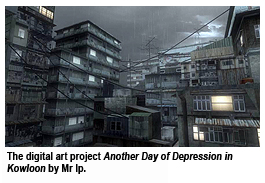 In addition, Mr Ip Yuk-yiu, Associate Professor in SCM, won an HKCAA for his digital art project Another Day of Depression in Kowloon, a virtual ethnographic study and digital portrait of Hong Kong as seen through the lens of contemporary popular culture incarnated in the forms of video game and screen media.
Max Chan Wang, a Year 2 student on the Bachelor of Arts in Creative Media, won an HKCAA, too, for this photography work Unfolded, a series of portraits of local public housing estates in which he photographs a tower block from four sides of the interior square of the estate and then “unfolds” the work to create a single planar image. 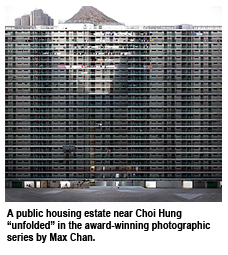 “I wanted to explore the possibilities of space and also preserve as a record these old housing estates,” Max explained.
These competitive awards were public recognition of SCM faculty and students’ efforts in search of excellence in artistic creation via different forms of creative media, said Professor Jeffrey Shaw, Dean of the SCM.
“This continued success ensures that SCM remains at the forefront in the field. We owe our accomplishments and success to the continual hard work and dedication of our faculty and students, without which SCM would not be where it is today,” he added.
The HKCAA were presented by the Leisure and Cultural Services Department and organised by the Hong Kong Museum of Art.