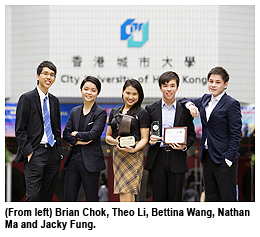 In the final round of the competition, now in its fifth year, the CityU team beat Kaplan Law School (UK) and Osgoode Hall Law School (Canada). Altogether 102 students in 26 teams from six continents took part in the competition held from 22 to 27 April.
The CityU team comprised Nathan Ma Hin-che (Year 2, LLB), Jacky Fung Wai-nam (Year 2, LLB), Bettina Wang Zhenyuan (Year 2, LLB), Brian Chok Man-ho (Year 3, LLB) and Theo Li Jiani (Year 3, JD) under the guidance of Dr Mark Kielsgard, Assistant Professor of SLW.
“We learned a lot during the tough, eight-month training,” said Nathan, who was awarded Best Prosecution Oralist and Best Oralist overall. “We played different roles and challenged each other just like in a real competition. Through this process, our arguments became more coherent, rigorous and persuasive.”
Twenty-year-old Nathan is the youngest ever winner of two individual prizes in the competition’s history. In fact, four of the five CityU representatives were born in the 1990s, and were generally much younger than most of their competitors, some of whom were graduate students.
It was the first time that SLW participated in the ICC Trial Competition and, more importantly, two members (Nathan and Bettina) of the team participated in an international moot court competition for the first time.
Last year, Brian Chok and Theo Li represented CityU at the Susan J. Ferrell Intercultural Human Rights Moot Court in the US and brought back the championship trophy. Brian said the practical experience gained last year helped him think more strategically and avoid traps set by competing teams.
“The School has put in a lot of effort and resources into moot court training,” Brian said. “Only with the unconditional support of the School, especially our coach, can we secure such success.” 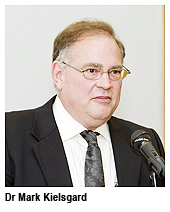 Dr Kielsgard stated that these five students acted as a team and beat older, more experienced participants by working harder and showing greater dedication. These students spent eight full months preparing for this competition, learning the law and procedure, drafting memoranda and perfecting their oral delivery. "This level of dedication is truly remarkable.”
The ICC Trial Competition is recognised by the International Criminal Court as the only one of its kind in the world. The panel comprises scholars, lawyers and internationally renowned judges from the International Criminal Court and International Criminal Tribunal of the former Yugoslavia.
The competition this year involved allegations of crimes against humanity committed in the fictional Republic of Libidan. In the final round, the CityU team acted as Counsel for the prosecution against the nation’s President for encouraging ritual slavery.