Two scientists at City University of Hong Kong (CityU) have won the 2011 Second Class Award in the Natural Science category at the Higher Education Outstanding Scientific Research Output Awards (Science and Technology) from the Ministry of Education. 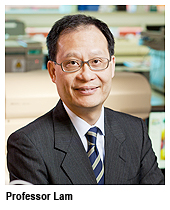 Professor Lam’s winning project was “Geochemical characteristics of perfluorinated compounds and risk assessment of southeast coastal waters in China”. An environmental expert, Professor Lam and his research team have ascertained that perfluorinated compounds (PFCs) are transported by water. The team has also developed innovative technologies of ultra-trace analysis for PFCs that can provide important data for the formulation of government policies on environmental protection and sustainable development.

“Preventive measures against pollutants should start from monitoring of environment,” Professor Lam said. “We must first identify the toxic pollutants in the environment and how they are transported and dispersed. Then we can find out preventive methods and formulate effective ways to deal with them.” Professor Lam is also the Director of CityU’s State Key Laboratory in Marine Pollution.

PFCs are widely used in industries of textile, paper making and electroplating. This type of organic pollutant can impair an animal’s liver function, reproductive system and nervous system as well as affect growth, disrupt the endocrine system and cause cancer. Many developed countries have imposed restriction on the use of several PFCs or are considering banning their use. 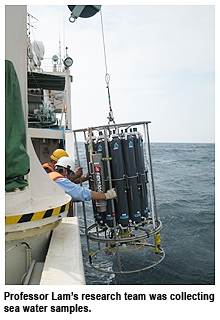 Since 2003, Professor Lam’s research team has identified and analysed the transport routes, distribution characteristics, patterns of seasonal variation and eco-toxicology of about 40 types of PFC in the waters from the Pearl River Estuary to the coast along the South China Sea. The team has also tested and evaluated the impact of the compounds on the health of marine mammals and humans.

“Similar studies in the past were concentrated on temperate and polar regions. We have pioneered research in subtropical regions, studying the impact of the compounds on biological systems. Our research results show that the concentrations of PFCs in the waters of this region are relatively low, which will not have an acute toxic effect on the health of waterbirds, fish or human. However, we should still be cautious about the potential harm caused by exposure to the compounds for a prolonged period and the synergistic toxicity of the compounds with other pollutants,” Professor Lam said.

The award was both a surprise and encouragement to Professor Lam. “The PFCs currently identified and measured only make up 20-30% of all such compounds. With the ever-increasing new PFCs, we shall continue our study and probe into their potential hazards,” he said. 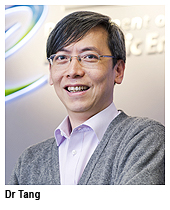 The other award recipient, Dr Tang, was honoured for his project “Hyperchaos in nonlinear systems: Modeling and optimised control with applications”, which is a collaborative research with Shandong University of Science and Technology. Dr Tang and his collaborators have developed a series of methods to generate hyperchaotic systems and optimised the controller design for these nonlinear systems.

“I am particularly grateful to CityU’s Department of Electronic Engineering and the Centre for Chaos and Complex Network for their support. The Department and the Centre have offered me many opportunities for academic exchange and collaboration with mainland and overseas scholars,” he said.