It is not often you see students running into a lecture theatre or lining up to have their photos taken with the speaker. But the presence of one of the world’s most famous mathematicians created a tangible buzz of excitement at City University of Hong Kong (CityU) this week. 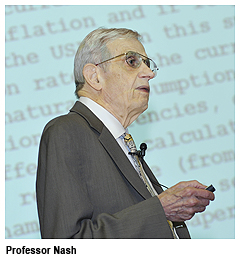 So great was the demand for seats to the talk by Professor John Nash, Nobel Prize winner in economics in 1994 and a legend in the field of game theory, that two extra lecture theatres were set aside for a live TV broadcast.

Professor Nash, a senior researcher at Princeton University, gave a talk titled “Ideal Money and the Motivation of Savings and Thrift” on 7 November at Wei Hing Theatre as part of the City University Distinguished Lecture series. The next day he received an Honorary Doctor of Science degree from CityU at the 2011 Congregation. 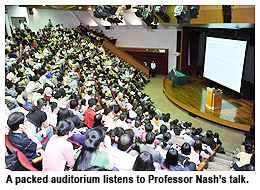 The talk and the Q&A touched on issues as diverse as global currency policies, Islamic banking, the 2008 financial crisis, Keynesian economic theory and of course game theory.

Professor Nash won the Nobel Prize for his work on a theory called non-cooperative games interactions between players who cannot form agreements and coalitions. His approach predicts the possible strategies that players might use under optimum circumstances. 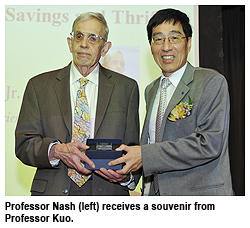 In his welcoming address, Professor Way Kuo, University President, suggested that Professor Nash should be a candidate for the Nobel Peace Prize, too, since Professor Nash’s work on game theory has made it possible for a win-win situation.

Professor Gregory Raupp, Vice-President (Research & Technology) and Dean of Graduate Studies, said Professor Nash’s work proved so compelling to CityU staff and students that the lecture was oversubscribed many times over even though the title of the talk had been advertised very simply as “Current Research on Contemporary Topics”.