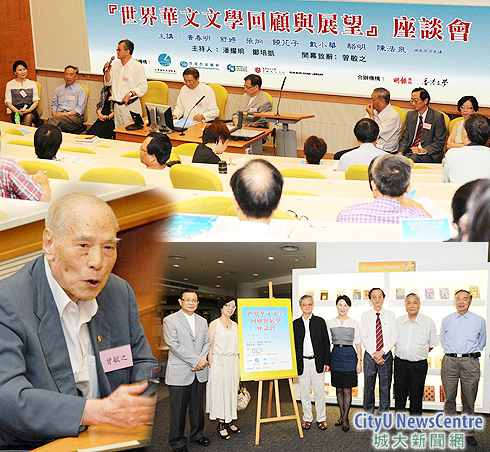 Renowned writers, poets and literary critics examined the past and future of Chinese-language literature worldwide at a seminar held at City University of Hong Kong (CityU) on 2 September. The event was co-organised by the Federation of World Chinese-Language Literature, Federation of Hong Kong Writers (FHKW), CityU's Run Run Shaw Library and Chinese Civilisation Centre (CCIV).

The day’s event was hosted by Mr Poon Yiu-ming, Chairman of FHKW, and Professor Cheng Pei-kai, Director of CCIV.

Mr Tsang Ming-tse, founding Chairman of FHKW, said in his opening address that the Chinese language was endowed with a “miraculous power” that has helped keep the nation’s civilisation and belles-lettres alive for millennia.

Moreover, he said, Chinese-language literature has spread across the globe. Wedded to indigenous writings, it has grown in vitality and is sure to flourish in competition with other global literatures.

Following their presentations, the audience was asked to join the speakers in a Q&A session. With input given from both sides, the auditorium overflowed with life and high spirits to the pleasure of those present at this intellectual feast.