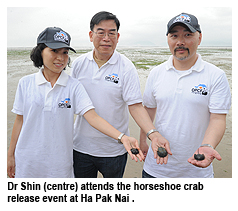 Over 100 horseshoe crabs were released into the wild at Ha Pak Nai, an ecologically sensitive piece of wetland in the northwestern part of Hong Kong, on a programme launched by City University of Hong Kong (CityU), Ocean Park Academy, Hong Kong (OPAHK), and Ocean Park Conservation Foundation, Hong Kong (OPCFHK) on 17 April.

This milestone conservation event involved 120 students from 10 secondary schools. It was the culmination of a 14-month-long programme for rearing juvenile horseshoe crabs.

Under the supervision of CityU researchers, the participating secondary school students learnt how to raise horseshoe crabs, record and monitor their growth, and release them in the wild. The aim was to bolster student interest in conservation and help preserve an endangered species.

Horseshoe crabs have undergone little evolutionary change over the last 400 million years. As one of the oldest species on earth, this “living fossil” is facing extinction due to anthropomorphic changes to their habitats over the past several decades. Of the four extant species, two can be found in Hong Kong. 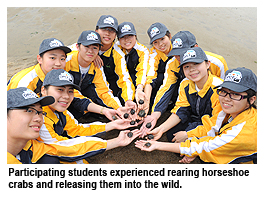 Dr Paul Shin Kam-shing, Associate Professor at CityU’s Department of Biology and Chemistry, said horseshoe crab populations in some mudflats and beaches in Hong Kong shrank by 90% between 2002 and 2009, according to surveys conducted by CityU in 2009, mainly because of habitat disturbance caused by urban development.

“While some studies show juvenile horseshoe crabs have a higher level of tolerance to heavy metals in sea water, such toxic chemicals can accumulate in their tissues and will result in further accumulation in the food chain,” Dr Shin said. “It is important to maintain good water quality and protect habitats, especially the spawning and nursery grounds, if we are going to help conserve these crabs.” Dr Shin stated that mortality, especially during molting, is the biggest challenge. “We have been able to induce natural spawning and breeding under laboratory conditions. A special feed that enables horseshoe crabs to grow at or above their normal rate has also been developed,” Dr Shin said. The programme has improved survival rates to 16%, compared to less than 0.01% in the wild.

CityU has been improving artificial breeding and rearing practices and life support systems for horseshoe crabs with OPCFHK since 2006. Ha Pak Nai, located along the coast of Deep Bay, is a native habitat for the species. Prior to release, a small electronic chip was inserted into a number of horseshoe crabs to track their growth and survival rates. Over the next six months, researchers will return to the mudflats every two weeks to check on the crabs.

In addition, CityU will organise the first-ever International Workshop on the Science and Conservation of Asian Horseshoe Crabs on 13-16 June at Hong Kong Wetland Park. The goal is to engage international experts in a dialogue to develop a strategy for conserving horseshoe crabs in Asia. Participants from Canada, mainland China, India, Malaysia, New Zealand, Singapore, Taiwan and the US will discuss topics under four themes: populations, habitats, exploitation and public consensus.