Literary Festival starts with “The City, Mountains and Seas” 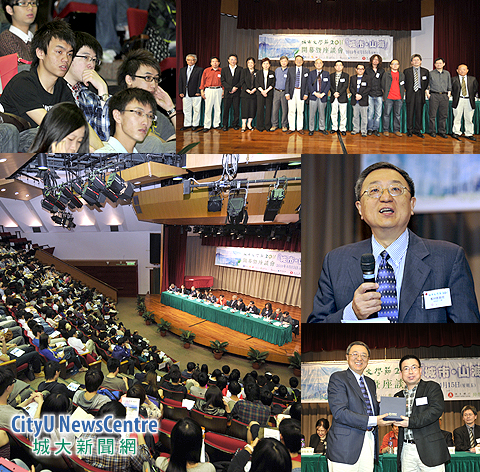 The annual City Literary Festival 2011 organised by Cultural and Sports Committee, Chinese Civilisation Centre, and Department of Chinese, Translation and Linguistics of City University of Hong Kong (CityU), is held on 15 and 16 April. This year’s Festival will focus on “The City, Mountains and Seas” as the theme.

The Festival opened on 15 April. Professor Cheng Pei-kai, Director of CityU’s Chinese Civilisation Centre, said at the opening ceremony that Hong Kong is more than a mere city as it embraces mountains and seas, all of which gives rise to literature. And it is literature that makes people ponder the meaning of life and enables them to express how they experience joy, sorrow, and sufferings that happen to all flesh, he added.

City Literary Festival 2011 features a series of activities including talks by guests on the theme of “Hong Kong Cityscape embraced in Mountains and Seas”, and dialogues of local students with the guests. The Hong Kong SAR Education Bureau helps to organise the Literary Festival for the first time this year by organising secondary students to come and meet the guests in dialogues.

The annual City Literary Festival aims to enhance young people’s (local and Macau) interest in writing. The activities include City Literary Awards, literary talks and dialogues with the guests.