Student volunteers and outside partners talked about their experiences at a sharing session titled “City-youth Cares About Children” organised by City University of Hong Kong (CityU) on 27 October. 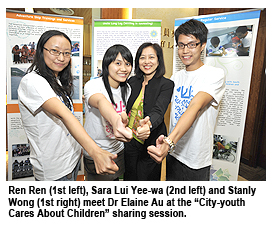 The event was part of the City-Youth Empowerment Project (YEP), which was set up in 2005 to encourage students to serve the community during their studies and after graduation.

Topics under discussion at the City-youth Cares About Children session ranged from working with children who had learning difficulties to helping those growing up in poverty.

Dr Elaine Au Liu Suk-ching, Convenor of the YEP and Associate Professor in the Department of Applied Social Studies, said a key point about volunteering is that it works both ways.

“The aim is to encourage students to care about others while at the same time benefiting themselves,” she said. “Most service recipients of this project are children and the main principle is that young people will benefit from and are more responsive to younger people, and vice versa.” 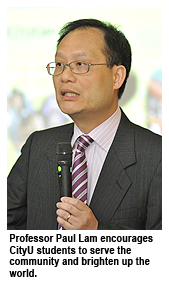 Professor Paul Lam Kwan-sing, Vice President (Student Affairs), said in his opening remarks at the “City-youth Cares About Children” session that the University is committed to helping people in society.

“CityU strives to enhance the development of the community,” he said, adding that he was grateful to witness the success of the project and hoped more students would participate in the future. All CityU students and alumni are welcome to join YEP. The idea is that students can develop a sustained approach to volunteerism, and by serving others, build a sense of belonging and a willingness to contribute to the unity, harmony and stability of a community. Volunteer services can also help promote personal growth.

Stanly Wong Suen-hei, recipient of the YEP’s Gold Award for 2009-10 and a local student in the Department of Applied Social Studies, said in his talk that communication was vital to the success of volunteering.

“Children have their own characters and needs, so in order to help them we need to know what those needs are,” said Stanly, who has notched up 114 hours of volunteer services. “We get to know more about children if we spend more time with them.”

Ren Ren, a CityU student from the mainland studying in the Department of Economics and Finance, said at the event that the greatest reward of volunteering is feeling that you are making a difference. “I am really happy when I see the smiling faces of children when we praise them,” she said. Ren Ren spends an average of two hours a week tutoring new immigrants and low-income families.

Ivan Tam Chi-wai, a 2010 graduate of the Department of Electronic Engineering, told the audience about his work on citizenship with primary and secondary school students. Currently studying for a diploma in education, Ivan said he plans to teach in a Band 3 secondary school in the future.

At its start YEP targeted CityU student residents. The project was very well received and the number of volunteers grew each year. The project has expanded from around 200 people in 2005 to more than 2,000 this year. About 3,000 people have benefited from the project in the last five years, and 12 social service units joined up for 2010-11. CityU has provided approximately HK$4 million in support so far.