The Dean of the College of Humanities and Social Sciences at City University of Hong Kong (CityU) has been awarded one of France’s most prestigious honours. 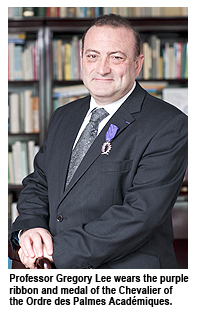 Professor Gregory Lee, Chair Professor of Chinese and Transcultural Studies in the Department of Asian and International Studies, was named a Chevalier (Knight) of the Ordre des Palmes Académiques (Order of Academic Palms) by the government of France for his services to education.

"I am delighted to receive the honour," said Professor Lee, who was Deputy President/ First Vice-President (Research) at University of Lyon 3 in France prior to joining CityU earlier this year.

"It is recognition for my work in administration, internationalisation, research and teaching, and for my overall contributions to collective life at the university and pushing forward higher education in France," he said.

The Ordre des Palmes Académiques, founded by Napoleon Bonaparte more than 200 years ago, is one of the world's oldest orders of chivalry. It is awarded to people, mainly educators, who have made significant contributions to French national education and the spread of French language and culture around the world.

"I am deeply honoured to get this award because it signifies a very high level of acceptance within French academia," he added.

A number of high profile French academics have written to congratulate Professor Lee, including Professor Hugues Fulchiron, President of University of Lyon 3, and Professor Roland Debbasch, the Rector of the Academy of Lyons. An academy in France is an administrative district for education.