The need to innovate in science and engineering is now, if the world is to overcome the critical challenges posed by increasing energy demand and climate change.

That was the core message delivered in an outstanding lecture by one of France’s top scientists on the issue of a sustainable and realistic commitment to the global supply of energy. The talk took place on 8 September at City University of Hong Kong (CityU) as part of the France-Hong Kong Distinguished Lecture Series. 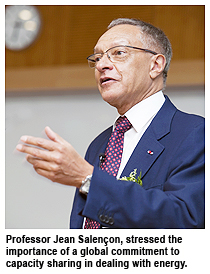 , President of the French Academy of Sciences, concluded his robust summary of current research developments into the energy issue by emphasising the importance of materials science and the vital need to generate new technologies that will enable humans to sustain current energy supplies and find new ways to exploit potential energy sources.

He also stressed the importance of a global commitment to capacity sharing, evoking the words of the US science administrator Vannevar Bush who famously said, "Basic scientific research is scientific capital."

Several members of CityU’s senior management attended the lecture including Professor Way Kuo, University President, who stressed in his introductory comments that CityU was delighted and honoured to host Professor Salençon's lecture on innovation needed to tackle increasing energy demand and climate change, issues that need to be tackled quickly. 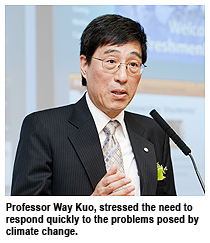 One of the key concepts presented in the hour-long lecture was the concept of the energy mix, a framework that acknowledges that the needs and resources of the world population depend largely on geographical, social, financial and political influences. He said a “low carbon economy" through renewable resources, including the recourse to nuclear energy, was essential even if fossil fuels continue to be a part of the “mix”, at least in the medium term.

“The energy mix means no country will rely on a single source of energy,” Professor Salençon said, detailing the various solutions currently under research around the world, including carbon capture and storage, solar and wind power, tidal and sea-current energy, and a new generation of nuclear reactors.

In covering these energy sources, Professor Salençon reminded the audience that social acceptability was a factor that cannot be ignored, referring to the negative term Nimby, which stands for “not in my back yard”. That is, policymakers, researchers and administrators dealing with energy issues have to deal with possible opposition to, for instance, wind farms because noise and visual aesthetics might irritate nearby residents. 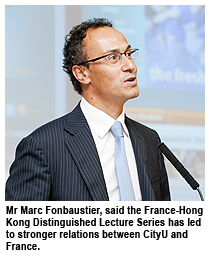 The audience was treated to a series of worrying statistics in the first part of Professor Salençon’s talk which dealt with the topicality of the energy issue: the world’s population is projected to rise to 9 billion by 2050, 70% of whom will live in urban areas, and global energy needs are expected to grow by 60% within the next two decades.

Professor Salençon referred to the “terrific” increase in energy needs, stating that global energy policies will determine the lifespan of our oil, gas, coal and even uranium reserves. It’s not so much “How much is left?” as “How are we going to use it?”

Taking transport as an example, since the oil-dependent automobile industry and the building of roads are unlikely to slow down, the innovations required should focus on re-engineering, according to Professor Salençon. He said it is no longer enough simply to think of new ways of modifying engines and new sources of biofuel, for instance; we need to rethink the entire mechatronics of the car.

He illustrated this concept by describing projects experimenting with placing small engines in each of a car’s four wheels as an alternative, or perhaps a supplement, to the main engine.

“The ultimate hope is to aim for better efficiency,” he said.

Mr Marc Fonbaustier, Consul General of France in Hong Kong, said the Lecture Series, which was initiated five years ago by Chair Professor Philippe G Ciarlet of the Department of Mathematics at CityU, and since then organised by him, was highly regarded and had not only given a number of eminent French thinkers the opportunity to meet CityU staff and students, it had also led to close relations between academics in Hong Kong and France, several scholarship programmes and so far more than a dozen research projects.

The event was sponsored by the Consulate General of France in Hong Kong, The Légion d'Honneur Club Hong Kong Chapter Association Limited, the French Academy of Sciences and CityU.

Professor Salençon has taught continuum mechanics, soil mechanics and mechanics of structures, and his main areas of research are the theories of elasticity, viscoelasticity and plasticity together with their applications to soil mechanics and structural engineering. He has written more than 180 publications and devoted many papers to stability analyses of slopes and surface footings under non standard conditions such as seismic actions.