Transforming China into a creator of knowledge

“China must not remain as the workshop of the world. Rather, as an increasingly affluent nation, it should focus on problem-driven research so that the phrase ‘Made in China’ can be repackaged as ‘Created in China,’” said Professor Way Kuo, President of City University of Hong Kong (CityU).

He was speaking on "Elite Forum", which will be broadcast on Phoenix Television (Chinese Channel) on 19 June. 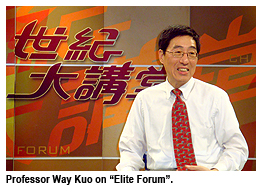 Some Chinese people respond negatively to news of groundbreaking research and development from overseas, he said. “There’s nothing special about such breakthroughs. China achieved similar advances in the past,” they say.

In the interview, Professor Kuo laid out an alternative position. He admitted that although some concepts had been created in China, they had often failed to take root.

“Research, and the application of research results, is a long-established practice in the West. The essence of this tradition is advocating independent thinking and objective criticism by analysing available solutions,” he said.

This was indeed the case in China around 2,000 years ago when the maxim for learned men that states “to pursue knowledge by studying the phenomena of nature” was first published in the Book of Rites from The Great Learning, he continued. 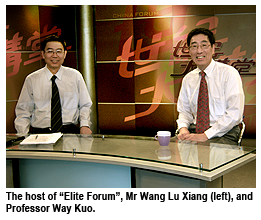 But China is more focused these days on propagating doctrine, passing on knowledge and dispelling doubts. Students only value academic achievements and, as a result, often lack initiative and creativity, he said.

According to the CityU President, institutions of learning are responsible for turning this situation around.

Professor Kuo went on to explain how the history of scientific development has shown that, in the process of learning and imparting knowledge, people should be encouraged to pursue knowledge by studying the phenomena of nature. In other words, they should acquire knowledge and learn how things work by conducting in-depth research if they wish to innovate in new areas of knowledge.

“Research should be based on facts,” Professor Kuo said. “This applies not only to science and technology, but also to the arts, humanities, philosophy and social sciences. Researchers should set clear goals so they can work for the well-being of the majority.”

He noted that research is not only a first-class way of enriching teaching and promoting educational reform, it is also an effective means of improving the efficiency of business management and governance.

“We have to try harder to trigger students’ interest in research early in their life and make it an integral part of modern education,” he said. 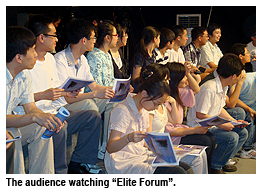 Curiosity is a human instinct, Professor Kuo went on to explain. “We are interested in nature and everything around us. What might start out as an accidental discovery could lead to decisive exploration, planned and systematic research that aims to promulgate new knowledge.”

He added that in the present era of globalisation, we should work together to address common problems. Just as England is no longer “the workshop of the world”, China, a responsible member of the international community that has quickly reduced poverty and modernised, is duty-bound to focus on problem-driven research. Innovative research is the way forward, he said.

Phoenix TV’s "Elite Forum" is known as a “feast of thinking and a platform of learning,” aiming to make academic discussion more accessible to the general public. The programme has grown in popularity, encompassing issues related to culture, education, finance, politics, science, society and technology.

Since the show’s launch in 2001, many Chinese and overseas experts have appeared as guests, including Professor Chen Ning Yang and Professor Charles Hard Townes, both Nobel Prize winners in physics.

"Elite Forum" will be broadcast at 2:10 pm on June 19 on Phoenix Television (Chinese Channel), and rebroadcast at 8:30 am and 11:30 pm on 20 June (Sunday). The TV programme can also be accessed via the Phoenix website at: http://phtv.ifeng.com/program/sjdjt/

President’s talk on convergence of talents