City University of Hong Kong (CityU) has awarded the first William Benter Prize in Applied Mathematics, a newly launched major international award in the field, to Professor George Papanicolaou, Robert Grimmett Professor of Mathematics of Stanford University, in recognition of his exceptional contributions across a wide spectrum of research areas in applied mathematics. 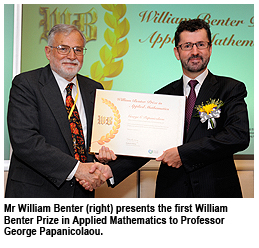 Professor Papanicolaou, an internationally acclaimed academic, is a Member of the US National Academy of Sciences. He has devoted his research to bridging theoretical research and applied problems in areas including pure physics, imaging analysis, fluid dynamics, electrodynamics and, more recently, stochastic analysis and financial applications, advancing the understanding of a range of phenomena.

The William Benter Prize in Applied Mathematics, a biennial award that carries a cash prize of US$100,000, was set up by the Liu Bie Ju Centre for Mathematical Sciences of CityU, to recognise outstanding mathematical contributions that have a direct and fundamental impact on scientific, business, finance and engineering applications.

Competition for the award was very keen. The selection committee, comprising distinguished academics from around the world, conducted a rigorous assessment of the nominations.

The prize was presented to Professor Papanicolaou by its donor, Mr William Benter, at the opening ceremony of the International Conference on Applied Mathematics, organised by the Liu Bie Ju Centre for Mathematical Sciences on 7 June. 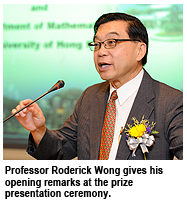 Professor Papanicolaou said he was deeply honoured to receive the prize, and especially to be the award’s first recipient.

Professor Roderick Wong Sue-cheun, Vice-President (Development and External Relations) at CityU and Director of the Liu Bie Ju Centre for Mathematical Sciences, said CityU was proud to have set up this award and presented the first prize to such a distinguished academic.

“Professor Papanicolaou is an outstanding scientist. His work is rigorous and has a great impact on the applied side,” said Professor Wong. “We at CityU strive to create applicable knowledge to support social and economic advancement, and this prize rightly manifests our mission in this regard.”

“I believe the work of the winner will have a lasting impact and his achievement will continue to inspire and encourage more mathematicians to devote their work to bridge theory and applications,” he added.

Professor Papanicolaou has impressed the academia with the breadth and applicability of his research. “It never fails to amaze me how a deeper understanding of the mathematics needed to solve a problem almost always opens doors to unexpected applications and further insight into seemingly unrelated issues,” he said.

Professor Papanicolaou has always been interested in modeling volatility in markets and the effects on derivatives. Since the recent financial crisis, he said he has become more conscious of the importance of risk assessment in various aspects of financial modeling. He said the financial crisis has shown that even carefully conducted model analysis and calibration can be deceptive and can obscure risk when it has only short-term horizons. 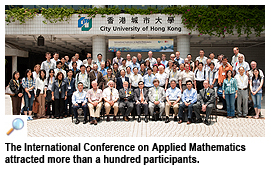 “The challenge that we face in financial mathematics is to find effective ways to introduce risk management into markets, including systemic risk that runs across interacting, highly interconnected markets,” he added.

In addition to his research, Professor Papanicolaou has also dedicated his efforts to nurturing budding mathematicians, including those from mainland China. He said mathematics and science in general are already at a very high level in China and is rapidly advancing because there is a strong and clearly visible consensus to support higher education and research. He foresees strengthened cooperation with the mainland as well as international institutions to further their commitment to excellence.

Following the prize presentation ceremony, Professor Papanicolaou was invited to give a lecture to more than 150 participants attending the conference. The event provides an opportunity for the exchange of expertise, experience and insights by mathematical scientists, physicists and young researchers in the field of applied mathematics.