Thirty-six exemplary research papers were recognised at The Fifth Certificate Award Ceremony of the Outstanding Academic Papers by Students (OAPS) held at CityU on 23 April.

Started in 2005, OAPS is a joint initiative of the Run Run Shaw Library and academic departments of City University of Hong Kong (CityU) under which outstanding research papers of students are identified, recognised and preserved in digital format. These high quality research papers are shared among various departments and units within the University and tertiary education communities abroad too. The project aims to promote scholarly communication and intellectual exchange across disciplines, regions and even cultures. Collaborative partnerships have already been 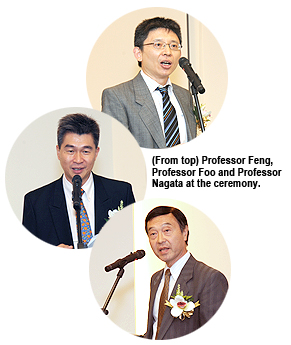 developed with 12 universities in the United States, South Korea, Singapore, Taiwan, Thailand, mainland China and Japan, including a new member - Waseda University, to share research findings. This year, 36 best papers were nominated by 11 academic departments. They are accessible at the CityU Institutional Repository.

Professor Gary Feng Gang, Associate Provost, said in his welcoming remarks that the OAPS is a platform to share quality research findings. “OAPS is expanding in global arena and is accessible globally, besides being searchable on search engines like Google Scholar and WorldCat. Global exposure and recognition help to cultivate students’ abilities of reflective thinking and encourage them to become competent leaders after graduation,” Professor Feng said.

Award-winning students went through their journey in research in the sharing session at the ceremony coordinated by Mr Choy Fatt-cheong, University Librarian of Nanyang Technological University and Professor David John Randall, Director of the Office of Education Development and General Education, CityU.

Tao Kwok-wai, a graduate from CityU’s Department of Information Systems, received the award for his paper titled Caofeidian Industrial Academic Papers Business Blueprint. He went to Caofeidian, the newly developed industrial zone in Hubei Province, China with his classmates and visited government officials there. His group comprising five members presented a proposal to the government officials on application of information and communications technology in the new industrial zone. “This project was very challenging. Caofeidian is an unknown place to us, and yet we had to draft the proposal and present it to the officials within five days. It was a valuable experience to work on a proposal in such a tight schedule,” he said.

Renee Mark Wang-yee, a Postgraduate Certificate in Laws student, was awarded for her paper on comparison of short-selling laws in the United States and Hong Kong. “Short-selling is a current issue affecting people around the world, particularly after the financial tsunami. Though I had no financial background, I learned a lot while working on this paper. I am so happy that it has been recognised by others,” Renee said.

Angus Yip Chi-hong, a graduate of the Master of Business Administration programme from the College of Business, was recognised for his paper on improving IT efficiency of the Department of Computer Science. He is also a Scientific Officer at the same department. “By applying the service model in my paper, the department can eliminate duplications and optimise performance of the IT systems, to improve the overall work flow in the department,” Angus said.

A selection of OAPS papers are on display at the Oval of the Library from 22 April onwards.