A large crowd of literature fans congregated in the Wei Hing Theatre to hear Mr Diaz expound upon his work. In a conversational format with City University of Hong Kong (CityU) first Writer-in-Residence, Ms Xu Xi, Mr Diaz provided insight into the colourful characters that populate his book, his unique fictional voice as well as the social commentary inherent in his settings and storylines.

The event was the first in a planned annual Pulitzer Prize Speaker Series. Following welcoming remarks from Professor Kingsley Bolton, Head of Department of English, and Ms Xu provided an overview of the career and work of the visiting “literary star”.

Diaz was born in the Dominican Republic but moved at a young age to New Jersey, US, with his parents. His first novel about the nerdy misfit Oscar Wao embraces the influences of both of these localities, with his work spanning countries, cultures and languages.

During his discussion with Ms Xu, the author addressed the issue of national identity and the perceptions people have about him in regard to nationality. "People are very attracted to a sense of national identity but most people will not fit into any such narrow definition. There are important cultural and historical experiences, but usually when these identities are discussed, it stems from some mythical notion that would not apply to many people at all,” Mr Diaz said. 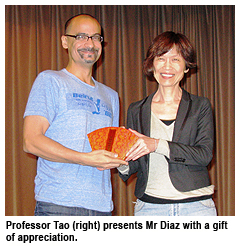 Somewhat renowned for the lengthy periods between publications, Mr Diaz told aspiring writers in the audience that quality was a distinct entity from quantity. “I always thought that my being a slow writer meant I was not talented. But I came to realise that I am good at something I am also very slow at,” he explained.

The process of formulating and writing The Brief Wondrous Life of Oscar Wao took more than a decade, including several years spent deliberating on the story subject, narrative structure and form. “Once that lightning bolt had struck and it was time to write, it was a matter of being disciplined enough to write four hours a day, teach and earn a living, remembering to forgive yourself when it isn’t working out, and eventually you get a book.”

At the conclusion of the conversation with Mr Diaz, Professor Julia Tao Lai Po-wah, Chief-of-Staff of CityU, presented the special guest with a gift of appreciation. Mr Diaz then stayed on for a book signing session and reception.