Mirroring the trend of previous years, the top three places on this year’s Annual Pan-Chinese Celebrity Rosters were taken by political figures. They are US President Barack Obama, China’s President Hu Jintao and Chen Shui-bian from Taipei in that order.

Released on 23 December by the Language Information Sciences Research Centre (LISRC) of City University of Hong Kong, the 2009 LIVAC Celebrity Rosters show political issues again dominating media coverage in Beijing and Taipei, while the Shanghai media was more focused on sports-related news. By comparison, entertainment personalities were given greater publicity in Hong Kong.

“Most celebrities on the rosters are, as in previous years, emerging or senior political figures in mainland China, the US or Taipei. This illustrates that Sino-US and cross-strait relationships are still the media focus among the Pan-Chinese press,” said Professor Benjamin T’sou Ka-yin, Director of LISRC.

The rosters detail the rankings in terms of total media exposure of personalities in Beijing, Hong Kong, Shanghai and Taipei. An additional Pan-Chinese roster encompassing Beijing, Hong Kong and Taipei is also collated from this data. The results are based on the accumulative statistics from the bi-weekly rosters compiled and published throughout 2009.

The People’s Republic of China celebrated its 60th anniversary in 2009, a year in which there was more news coverage about mainland China than usual. Beijing’s new found pride and vision can be seen in Beijing’s celebrity roster where only one individual was non-Chinese among the 25 on the list. 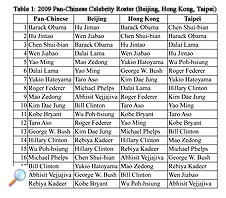 This year’s Pan-Chinese roster (Table 1) contains a total of 19 names, among whom 12 are non-Chinese. Taipei’s former Kuomintang chairman Wu Poh-hsiung and Tibetan spiritual leader Dalai Lama would not appear on the Pan-Chinese roster if Shanghai was also included. This shows that the Shanghai media has marginalised these two figures. On the other hand, the Xinjiang violence gave Rebiya Kadeer sufficient media exposure to allow her to be included on the overall roster.

As in the past, the range of individuals found in the regional rosters (Table 2) was revealing. On the Hong Kong roster, showbiz celebrities still account 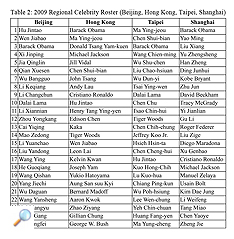 for 32% of the total (same as last year). It is noteworthy to see that the two major figures in science and technology, Charles Kao Kuen, Nobel Prize winner and father of fibre optics, and Qian Xuesen, father of Chinese rocket science, failed to make it to the roster, while entertainment figures such as Edison Chen, Gillian Chung, Kelvin Kwan and Jill Vidal attracted more media coverage.

The similar ratio of local and non-local celebrities in Taipei and Beijing is also noteworthy. In Beijing, the only non-Chinese celebrity is the US president Barack Obama, while in Taipei Tiger Woods is included in addition to the US president. Whereas Beijing’s preoccupation with itself could be induced by national pride, for being recognised as an emerging world power, Taipei’s greater concern with itself may reflect a primary concern about putting the house in order in the wake of the years under Chen Shui-bian. As usual, Shanghai’s pragmatism may be reflected by the domination of sports celebrities on its local roster, with only one from showbiz: Michael Jackson, making the grade. It is noteworthy that there are 11 non-Chinese celebrities on the Shanghai list, suggesting a comparable, if not greater, degree of cosmopolitanism than Hong Kong.