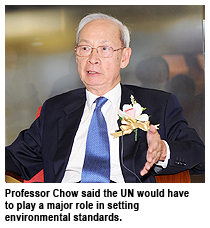 The environment was given the good news and the bad news at a lecture by world-renowned economist and Honorary Professor at City University of Hong Kong (CityU), Professor Gregory Chow.

As guest speaker of the Pearl River Delta and Yangtze River Delta Distinguished Lecture held at CityU’s Run Run Shaw Library, Professor Chow used the forum to highlight the strengths and weaknesses of China’s environmental efforts and the need for the United Nations (UN) to play a pivotal role in designating emission levels around the world on a per capita basis.

For China, the challenges lied in the fact it was home to seven of the top 10 most polluted cities on earth and its 2006-2010 Five-Year Plan to reduce energy consumption by 20% by next year was far behind schedule. But like a doctor addressing a patient, Professor Chow also had some good news to deliver.

“It is encouraging to relate two successful experiences in China’s effort to solve its energy and environmental problems,” said Professor Chow. “In the development of clean energy it has significantly increased the production and export of solar panels. And in the control of air pollution it has reduced the emission of sulphur dioxide from power plants through the use of mechanical scrubbers.” 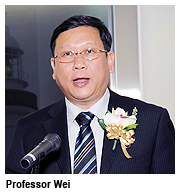 Professor Chow pointed out that it was fitting his talk, entitled “Protecting the Environment in China and in the World,” was being given at CityU in light of the University establishing the new School of Energy and Environment, the first of its kind in Hong Kong

Professor Chow, a Class of 1913 Professor of Political Economy, Emeritus, at Princeton University, is a member of the American Philosophical Society, an Academician of Academia Sinica and a Fellow of the American Statistical Association and the Econometric Society. He publishes extensively in the areas of econometrics and the Chinese economy. The celebrated “Chow Test” was named after him. He is currently Honorary Professor in the Department of Economics and Finance at CityU.

During the distinguished lecture, Professor Chow presented a string of important accomplishments in developing clean energy and in regulating air pollution in China. He proposed a solution to the problem of limiting carbon emissions around the world through a resolution of the UN.

“The UN should decide the total amo 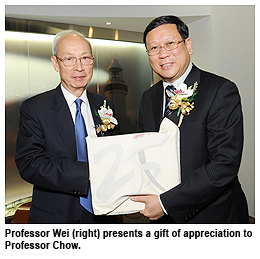 Professor Wei Kwok-kee, Dean of the College of Business, introduced Professor Chow and outlined some of his career highlights.

Professor Chow studied in the US at Cornell University and University of Chicago, where he earned his bachelors, masters and doctoral degrees. Later he taught at MIT, Cornell University, Columbia University and other world-famous institutions. He is a world-renowned expert in China's economy and an authority on econometrics. In the 1960s he originated the “Chow test”, which has become an important tool in econometrics. He also put forward the spectral methods and optimal control methods for the analysis of econometric models. The Econometric Research Programme at Princeton University was renamed the Gregory C Chow Econometric Research Programme in his honour.