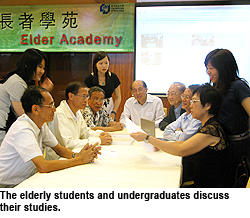 Fifty diligent elderly students received certificates from City University of Hong Kong (CityU) at a ceremony on 19 May, after completing their Elderly Academy courses this semester.

The Elderly Academy, established by CityU last September, is an initiative of the Elderly Commission and the Labour and Welfare Bureau to provide an opportunity for senior citizens to enjoy university education as students. The students from this second cohort, aged between 60 and 73, studied with CityU undergraduates in courses such as law, Chinese language and culture, creative and problem-solving skills and Putonghua. 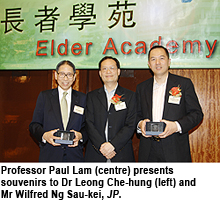 Dr Leong Che-hung, GBS, JP, Chairman of the Elderly Commission, congratulated the elderly students for their successful completion of the courses. He expressed gratitude to Mr Wilfred Ng Sau-kei, JP, Chairman of the Board of Directors for Yan Chai Hospital, for sponsoring the first cohort of graduates to continue their studies in other courses at the Elderly Academy.

“Elderly service should not solely be the responsibility of the Government but of everybody,” said Dr Leong. “It should be implemented through the joint efforts of business and charity organisations as well as other sectors of society.” He said the success of the academy was testimony to the philosophy of lifelong learning and he was confident the elderly graduates would make contributions to society.

Professor Paul Lam Kwan-sing, CityU’s Vice-President (Student Affairs), said the elderly students’ enthusiastic attitude set a good example to undergraduates. “I hope the Elderly Academy can be expanded with the support of the public and private sectors to offer more courses and accept more students in the future. CityU’s students benefit through the valuable experience of the senior citizens,” said Professor Lam. 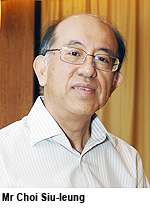 Five elderly students from the second cohort formed an organising committee to arrange the programme and games for the graduation ceremony. Mr Choi Siu-leung, one of the organising committee members, said it was a pleasant experience organising the ceremony with his friendly classmates. He even volunteered to serve as master of ceremonies. Mr Choi said elderly people should not be intimidated by new challenges due to their old age. They should boldly take on challenges, he said. “My biggest gain from enrolling in the Elderly Academy was to have the chance to start learning all over again to improve myself. I could keep abreast of the latest developments in the world.” 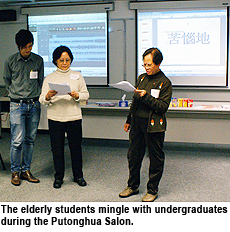 Mr Choi pointed out that studying academy courses enabled him to enjoy social interaction with fellow students of a similar age and to gain some understanding of the lifestyle of undergraduates, which helped him communicate with his children. “I found I could discuss my homework with my children and they acted as my supervisors. It was good for bonding,” said Mr Choi.

Tsang Yuen-yu, a Year 2 Associate of Business Administration (Marketing) student at the Community College of City University, served as a buddy to the elderly students. She said the buddy scheme helped elderly students adapt quickly to the university environment so they could enjoy university life. “The elderly students were full of vigour, took part in different activities and were willing to express their opinion. They taught me to take the initiative and grasp different opportunities,” she said.