Professor Way Kuo, President of City University of Hong Kong (CityU), travelled to Beijing from 21 to 24 December and met the leaders of several government departments and institutions, including the Ministry of Education, the Ministry of Science and Technology, the Chinese Academy of Engineering, the Supreme People’s Court and Tsinghua University.

Accompanied by Dr Zhu Guobin, Director of External Liaison and Cooperation Office, and Ms Pauline Chan Hing-yan, Assistant to the President (Community Relations), Professor Kuo’s visit aimed to build a solid foundation for the University’s further development on the mainland through strengthened ties. This visit would help create more opportunities for collaboration in the realms of academic studies, science and technology and professional training.

In a meeting with Mr Zhou Ji, Minister of Education, Professor Kuo thanked the Ministry of Education for extending its full support to Hong Kong’s tertiary education institutions, and CityU in particular, in regards to student recruitment exercises and collaboration projects. Mr Zhou indicated the Ministry would continue to offer its support to CityU’s future mainland education and research programme initiatives.

As a foreign member of the Chinese Academy of Engineering, Professor Kuo visited Mr Xu Kuangdi and Mr Pan Yunhe, the President and Vice President of the Academy, to explore the possibility of future collaborations between CityU and the Academy. Both institutions plan to jointly organise a members’ conference in Hong Kong in 2009 as part of the celebrations for the 25th anniversary of CityU.

Together with colleagues including Professor Wang Guiguo, Dean of the School of Law, Professor Kuo visited the Supreme People’s Court and met
Mr Wan Exiang, Vice President of the Court, and Mr Huai Xiaofeng and
Mr Zhang Wei, President and Vice President of National Judges College respectively. They discussed the implementation of CityU’s advanced legal training for serving mainland judges.

Despite the tight schedule of the trip, Professor Kuo has made significant progress, including constructive communication with 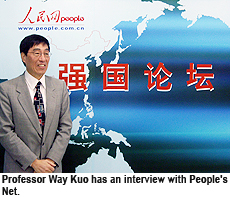 various government units and the advancement of many collaborative projects. It is expected that CityU will soon implement new initiatives to strengthen its cooperation with mainland academic, research and administrative units on education and science and technology projects.

Professor Kuo also gave an on-line interview to the renowned China Forum at People.com, the mainland’s largest official website. He discussed his education philosophy and fielded questions from the audience. To view the interview, visit the following webpage: http://hm.people.com.cn/GB/42280/141506/index.html