More than 40 faculty members from various departments exchanged views with Professor Way Kuo, President of City University of Hong Kong (CityU), on 29 October at a tea gathering organised to foster open communication within the CityU community about University affairs.

The tea gathering, the second in a monthly series, was well-received by faculty members who described it as stimulating and beneficial to promoting mutual understanding. 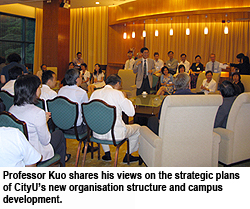 To encourage discussion, Professor Kuo started the dialogue by inviting colleagues to raise questions or voice opinions on matters relating to the University. His frankness prompted an enthusiastic response from the participants who raised a variety of issues, including future development plans for the University, the recruitment of additional teaching staff and staff benefits.

In response to the questions, Professor Kuo outlined his plan for strengthening both the academic and research capabilities of the University. He also outlined the new organisation structure, campus development plans and measures the University would adopt to support faculty and staff.

Professor Christian Wagner, of the Department of Information Systems, said the forum was informative. “It was good to see how enthusiastic the dialogue was, as well as the openness and the President’s attitude of promoting a professional approach,” he said.

“This is a golden opportunity for us to meet more colleagues and mingle in a cordial setting,” said Mrs Mary Rose Chu Ng Wing-wah, Director of Academic Regulations and Records Office. “Besides, the discussions are interesting and it is good to listen to other’s thoughts. I found it appealing because the President gave immediate responses to colleagues’ questions and we could learn about his thoughts on the University’s direction.”

Dr Chan Yuk-wah, Assistant Professor of the Department of Asian and International Studies, said the forum presented a casual platform for the President and colleagues to get to know each other. “The forum bolsters mutual understanding as colleagues can learn more about the management’s strategies on the University’s development,” she said.

At the end of the forum, Professor Kuo thanked colleagues for their participation and called for their concerted effort to recruit the world’s top talent to strengthen CityU as a leading institution for teaching and research.