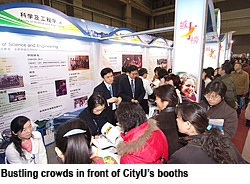 Beijing in early March may still have been in the grip of winter, yet the heat was on at the China World Trade Exhibition Centre. The venue was abuzz with jostling crowds attracted to the 13th China International Education Exhibition Tour (CIEET), at which CityU staged its largest ever exhibition. A team of around 40 academics and administrators took part, including the heads of the University's various offices, faculties and departments.

Professor Paul Lam Kwan-sing, Acting Vice-President (Undergraduate Education) not only came to the exhibition venue but also, before the fair opened, paid a call to officials of the Ministry of Education of China and held talks with journalists from around 10 local media companies, outlining CityU's strategies in recruiting top students from the mainland. 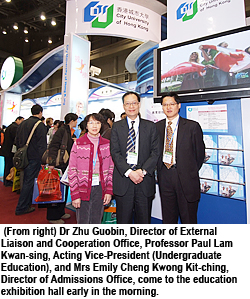 "As Hong Kong's ties with the mainland become closer, it is increasingly important for local universities to recruit mainland students," said Professor Lam during the media briefing on 28 February. "On the basis of solid growth over the past few years and with the new emphasis on recruitment in the inland provinces, we would expect to increase the overall number of students recruited from the mainland this year."

"Even though new Hong Kong government policy allows us to accept more students from the mainland, CityU still adheres to the principle of prioritising quality. We strive to recruit the best candidates possible and provide them with the best possible service," added Professor Lam.

CIEET is the largest exhibition of its kind in mainland China. This year, more than 400 tertiary institutions and educational bodies from nearly 30 countries and areas participated in the tour. It is scheduled to last for 16 days and cover five cities ― Beijing, Xi'an, Shanghai, Changsha and Guangzhou.

Higher education recruitment has become more competitive over the years. Universities are trying their best to display their strengths and attract the crème de la crème of high-school graduates. CityU kicked off its 2008 mainland recruitment drive in Beijing, armed with its track record of academic excellence, professional and globalised education and quality scholarships.

CityU's booths stood out in the exhibition hall, with a row of glass pillars showcasing the achievements of its graduates. The display, highlighting the university's image as a professional education provider, was coordinated by the External Liaison and Cooperation Office with input from numerous faculties and departments. Colleagues from various departments and administration units answered questions and enquiries from eager prospective students and their parents.

Among those busily representing CityU was Mrs Emily Cheng Kwong Kit-ching, Director of Admissions Office. Also working hard was Dr Muammer Ozer, Associate Professor of Department of Management, who had taken part in the annual tour several times previously. Even though he did not speak Chinese, he provided valuable assistance to many English-speaking young people seeking more information about the University’s programmes and courses.

Dr Zhu gave a brief introduction of CityU's recruitment details on the mainland in his talk entitled "Shape your future in a globalised university". The seminar hall was packed long before the talk started, a powerful testimony to the enthusiasm of mainland students and their parents to learn about CityU.

Dr Zhu said CityU, while still a young university, took pride in being a proactive, aggressive and adaptive university, full of creativity and vitality. Dr Zhu and his colleagues have worked hard to enhance the University's image and to increase public awareness of its strengths in regard to the mainland.

"We are cheerleaders for CityU, so to speak, but the University's fame rests with its excellence in academic achievement and applied research," said Dr Zhu. "CityU's academics have done a great job to this end. On the one hand, they have excelled in various academic fields and bolstered CityU's reputation, resulting in an improvement to the University's worldwide ranking. On the other, they take time to join this exhibition tour and provide much-needed consultations with prospective students and their parents."

The External Liaison and Cooperation Office has adopted a two-pronged strategy to mainland recruitment. It has invited representatives from top-notch secondary schools on the mainland to come and take a look at CityU's globalised education environment and traversed the mainland, holding press conferences, giving road-shows and even visiting secondary schools to meet in person with students, teachers and parents.

"We strive to think out of the box and explore the potential of students from recently-accessed provinces and cities," revealed Dr Zhu. "While we will maintain a steady intake from the coastal population centres, we'll also try to attract talented students from inland provinces. I hope to see more of them on campus this year."