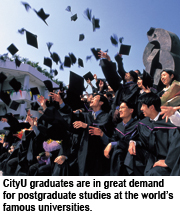 Many City University of Hong Kong (CityU) graduates have been admitted for postgraduate studies at the world’s famous universities, such as Yale University, Massachusetts Institute of Technology (MIT), University of California, Berkeley (UC Berkeley) and Columbia University in the US and Cambridge University and Oxford University in the UK, reinforcing our stature as a university with strengths in curriculum design, teaching and research that produces quality graduates.

These graduates come from various schools and faculties. Many of them have been offered full scholarships to study at these top institutions. 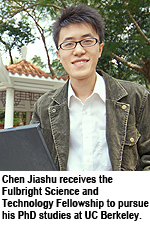 Chen Jiashu and Su Xueyuan, graduates from the Department of Electronic Engineering, have been offered full scholarships by UC Berkeley and Yale University, respectively, to pursue their PhD studies.

Jiashu is one of 27 awardees worldwide and the only one from Hong Kong to have received earlier the Fulbright Science and Technology Fellowship from the US Department of State, which sponsors his PhD studies at UC Berkeley.

Liang Xiangdong, a Master of Philosophy (MPhil) student in Applied Mathematics, will pursue his doctoral studies on a full scholarship at MIT, a centre of excellence in applied mathematics. Only eight students are accepted for its applied mathematics doctoral programme each year. He has also been offered scholarships by UC Berkeley and Oxford University.

Lu Yinan, a Bachelor of Science in Computing Mathematics graduate from the Department of Mathematics, is another success story. He has been admitted to the master’s degree programme in Financial Engineering at the Fu Foundation School of Engineering and Applied Science, Columbia University. 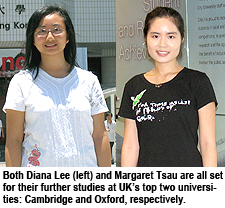 In addition, Oxford and Cambridge universities have accepted a number of CityU graduates, providing them with enviable opportunities to pursue academic and research excellence. Margaret Tsau Tze-man and Diana Lee Hoi-yee, both of them majoring in the BA (Hons) Linguistics and Language Technology in the Department of Chinese, Translation and Linguistics, will pursue their master’s degrees in linguistics at Oxford University and Cambridge University, respectively. Master of Science in Applied Economics (MSAE) and MPhil graduates from the Department of Economics and Finance, Liu Rui and Li Lingxiao, have also been admitted to Oxford University.

Meanwhile, some of our graduates have been offered scholarships to study at other overseas universities. Pauline Chui Pui-ling, a BSc (Hons) student of the Department of Computer Science, has received the Monbukagakusho Scholarship from the Ministry of Education, Culture, Sports, Science and Technology of Japan, to study for her master’s degree in the Educational Programme of Japanese Advanced Information Technology at Tokyo Institute of Technology.