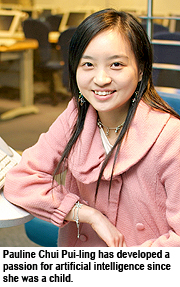 A computer science graduate from City University of Hong Kong (CityU)has been awarded a prestigious scholarship by the Japanese Government, enabling her to pursue postgraduate research in artificial intelligence (AI).

Pauline Chui Pui-ling, who graduated with first-class honours in 2006, won a Monbukagakusho Scholarship which will sponsor her master’s degree studies under the Educational Programme of Japanese Advanced Information Technology at the Tokyo Institute of Technology. She is one of only two awardees worldwide to receive the honour.

The Monbukagakusho Scholarship, sponsored by the Ministry of Education, Culture, Sports, Science and Technology in Japan, is designed for international students with an excellent academic record.

“I am really delighted by the news,” Ms Chui said. “Japan is a world leader in both research and practical application in many areas of information science and technology, and the Tokyo Institute of Technology is renowned for its study of the sciences.”

She will go to Japan in September and plans to work on theories and applications of machine learning during her two-year master’s degree programme. Machine learning, a part of AI studies, is the study of methods by which a computer can simulate aspects of human intelligence, an area that Ms Chui has developed a passion for ever since she was a child.

“I fantasized about incorporating a computer into the human brain which would then give me a highly-accurate memory capacity, like a computer, while at the same time retaining the learning ability of a human being,” she said. When she learnt about the AI course offered at CityU, she knew immediately where she should study.

In addition to achieving first-class honours, Ms Chui has been awarded several scholarships for her academic performance.

In her innovative Final Year Project under the supervision of Professor (Chair) Horace Ip Ho-shing of CityU’s Department of Computer Science, Ms Chui worked with another student to devise a web-based electronic tourist guide that helps find routes and gives out travel information.

“The design is based on the knowledge that we learned in the Intelligent Systems course conducted by Professor Ip Ho-shing at CityU. 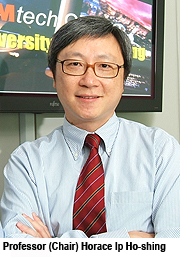 When the user logs onto the guide using a PDA connected to the Internet, his or her location will be detected automatically and the optimal route for a specified destination will be suggested,” she said.

Professor Ip praised Ms Chui’s ingenuity. “Her project involved a range of advanced technologies, including techniques for mobile location tracking, AI and computer graphics for a mobile PDA device as well as server-side programming. She learnt these technologies very quickly and completed the project with flying colours. I hope this has given her a solid foundation to face the challenges ahead in her research,” he said.