The winners of the Hong Kong Underwater Robot Challenge, which wa 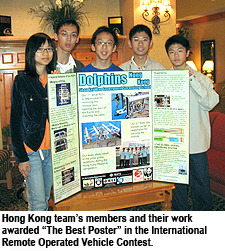 s jointly organized by CityU and WWF Hong Kong, have beaten 24 top teams from around North America to win three of the major prizes at the finals of the International Remote Operated Vehicle (ROV) Contest.

The students won the Judges’ Prize for the Best ROV, the Best Poster and the Best ‘Rookie’ of the Year. The competition was held at NASA Houston Space Centre in Texas, US, from 23 to 25 June.

Mrs Liliana Kung, the Principal of Shau Kei Wan Government Secondary School, thanked CityU and WWF Hong Kong for their professional guidance. “We really appreciate the resources that CityU put into holding this contest. The whole project has really helped our students to apply what they learn from textbooks to the real world,” Mrs Kung said.

Professor Luk Kwai-man, Head of the Department of Electronic Engineering at CityU, said: “CityU has been involved in underwater robotics research for about 10 years and is very keen on passing the technology on to younger generations.” 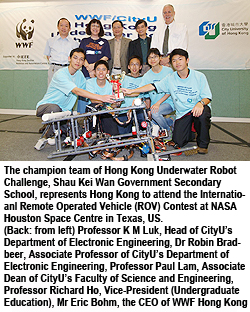 The winning team, which comprised five F.6 students from Shau Kei Wan Government Secondary School, had previously beaten 15 other local secondary schools to win the Hong Kong Underwater Robot Challenge, which took place on 9 April at CityU’s swimming pool. CityU and WWF provided each team with a basic robot module free of charge and held workshops at CityU on how to build an underwater robot and modify the basic design to accomplish the required tasks.

The ROV contest in the US is organized by the Marine Advanced Technology Education Centre and the Marine Technology Society’s ROV Committee. The contest has been running for five years and this year was the first time a team from outside North America attended the competition.

The contest started earlier this year with 133 teams from the US, Canada and Hong Kong. The winners of the 25 regional contests competed in the international finals where they had to perform a series of complex tasks while controlling a remote vehicle underwater via a video screen. The contest was judged on the time taken to complete the tasks plus project reports and presentations.

Dr Robin Bradbeer, Associate Professor in the Department of Electronic Engineering at CityU and the 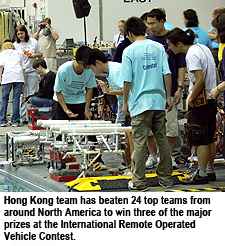 Hong Kong team’s technical advisor, said she was amazed by the team’s progress in the two months between the Hong Kong contest and the Houston event.

“This achievement shows what Hong Kong students can do when faced with such a challenge. And to do so well in an engineering-based contest, which is an area that Hong Kong is not considered strong in, shows what talent lies untapped here,” she said.

Mr Eric Bohm, the CEO of WWF Hong Kong said the competition was a marvellous opportunity for Hong Kong students to learn new skills. “We can all be proud of these students and the WWF congratulates them on this excellent achievement. This is another display of Hong Kong’s great intellectual capacity,” he said.

Mrs Kung said, “Winning the award had a positive effect on the whole school. The team members and all their school friends are taking much greater interest nowadays in this kind of technology.” She also thanked the school alumni association for funding the team’s trip to Houston.