The Department of Electronic Engineering (EE) of City University of Hong Kong (CityU) was ranked second worldwide, according to a recent survey conducted by Yuan Ze University in .

The ranking reveals global recognition of the EE’s achievements in electronics research and its training of engineers to serve and the region.

In the survey, 265 universities across the world were rated by their average number of Science Citation Index (SCI) papers published per academic staff from 2000 to 2002.  During this period, EE published an average of 3.46 papers per academic per year, which ranks the Department second worldwide and first in the Asia-Pacific region.  In addition, CityU published an average of 138.3 SCI papers per year, the sixth most productive university in electronic engineering in the world.

The top 10 universities in the SCI publication ranking list are:

SCI is published by the Institute for Scientific Information, a prestigious professional body in the . It provides access to current bibliographic information and cited references, and indexes all significant items (articles, review papers, meeting abstracts, letters, editorials, book reviews, correction notices, etc.) from approximately 3,300 major scientific and technical journals in a broad range of disciplines. 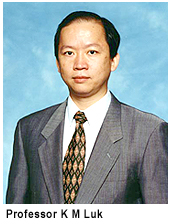 “We are very honoured by the ranking,” said Professor (Chair) Luk Kwai-man, Head of EE.  “It once again reflects our strength in teaching, research and international reputation and will certainly encourage us to devote greater efforts to electronic engineering research.”

EE now boasts seven IEEE Fellows, a record for a single academic department in . Moreover, many EE students and graduates have received numerous local, regional and international awards for their outstanding performance. CityU came first in both the number and level of grant awards in the “Electrical and Electronic Engineering” discipline in the 2004-05 Competitive Earmarked Research Grant exercise supported by the Research Grants Council.

EE is one of the seven academic departments in CityU’s Faculty of Science and Engineering, an area of strength in CityU in terms of international competitiveness, critical mass, staff and student outputs, and awards obtained. Its academics have made significant achievements in applied research and technology transfer. Many ground-breaking technologies have been commercialized into marketable products such as base station antennas; compact antennas and radio frequency modules; dimming control for electronic ballast; and the millimeter-wave receiving technology.