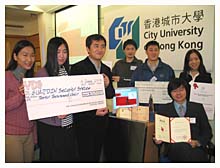 This is the 2nd award Geng has won since he became an MPhil student in the Department of Physics and Materials Science at CityU in September 2002. Just two months before his 23rd birthday party, his team won first prize in the YDC E-Challenge 2003 Competition organized by the Young Entrepreneurs Development Council Ltd in June 2003. 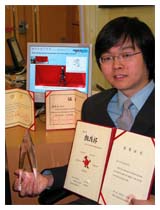 Geng spoke frankly about the excitement of entering and winning competitions, when asked to share his experience of success in the contests. He has taken part in at least four business and technology competitions together with his teammates in less than three years. However, winning awards is not his main concern. “Winning does make us feel relieved and excited, and the process of working hard to achieve an aim is memorable”, he commented on behalf of “The Fifth Media” and himself.

Geng considers creativity and teamwork to be the key to success. “I am glad that I could find so many good team members to work hard on the projects,” he said animatedly about his team. “Our effort was finally rewarded.” “The Fifth Media”, set up by Geng comprises 13 core members, most of them students from the Mainland studying in Hong Kong including five from CityU.

Challenges
It is a great challenge to unite people with different educational levels and from various departments to work together, and to manage limitations of time and resources. Geng likes challenges. He also likes to contact and work with different people to develop his teamwork, interpersonal, organizing and leadership skills. “It is important for young people to develop good personal contacts and leadership skills,” Geng said, eyes bright. “Before every competition, I meet with my teammates individually. I am so lucky to have made friends with a common vision through my team.” 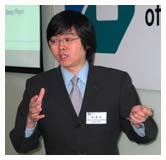 Asked how the ideas of his two winning projects, “Body Identifying Gait Characteristic Curve Recognition System” and “Mobile E-Credit Card System”, came about, Geng answered, “They just came out naturally. For example, the Mobile E-Credit Card System meets the needs of social development. Like the computer 30 years ago, and the internet 10 years ago, wireless internet will become popular after some time. Then, mobile e-credit card and personal internet terminals will be the basic services everybody knows and needs,” Geng explained. “I just happened to realize it a little bit earlier than others.”

His thinking resulted in the system which allows a credit card transaction through mobile phone and brought his team the Gold Award of the Mobil Multimedia Communications Design Contest 2003 as well as entitlement to two years free occupancy in the Hong Kong Science and Technology Park.

“I often encourage myself to explore the world more while in school. I believe that the Goddess of Opportunity only touches those who closely observe their lives, no matter what their past experiences or environment,” he says. This might also explain why he sometimes thinks “a little bit earlier” than others.

Looking forward
Geng had won the numerous awards while studying in Tsinghua University, by organizing and joining teams in many fields. His achievements also included a patent and two research papers. About his current life at CityU, Geng said, “The advantageous geographical location of CityU gives me more opportunities to contact Hong Kong society. I have matured and can bear more pressure after undergoing so many contests. I am very clear now on what I am going to do.” He is going to apply for a Doctorate in international finance, either at Harvard, Stanford or Yale in the United States.

From Geng’s viewpoint, there are no boundaries between subjects. He has explored various subjects, such as Computer Science, Biomedicine and Wireless Communications. “I believe that economics is definitely going to combine with science and technology,” Geng asserts. He is confident of attaining some achievements in the economic field in the future, with many years of science and technology studies as his foundation. In fact, most of Geng’s winning projects are inter-disciplinary. He explains, “My team was successful, not only because of ideas, but also because of technology. Our local competitors are mainly business major students who ignore the importance of technology.”

Geng’s passion, creativity and hard work will no doubt bring him a wonderful life, and dig out his potential, just like Li Ka-Shing, the self-made billionaire whom Geng admires. However, he cautions, “Wherever I may study, I will finally return to serve my motherland.” Geng is very certain of it.