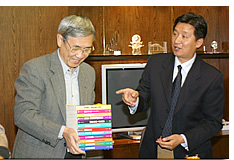 The co-operation between CityU's School of Creative Media (SCM) and China's premier film school moved a step closer to reality, after a delegation of 20 leading Chinese educators in film-making and performing arts from the Beijing Film Academy (BFA) visited CityU 28 February. 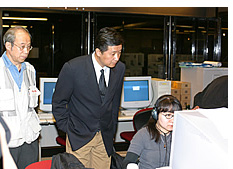 The collaboration that both sides are working hard to set up since last year, in fact, will contribute towards a tripartite alliance, together with the School of Cinema and Television of the University of Southern California (USC). "The strategic partnership will not only span geographical distance but also straddle different cultures," Professor Chang told the visitors, who were professors and key administrators representing almost all of BFA's major academic and administrative departments, from cinematography and animation, to performing arts and international exchange. 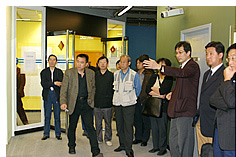 The tripartite links, the first in the Asia-Pacific Rim area with the SCM playing a pivotal role, will involve exchanges of students, staff and expertise, and sharing of resources. It may also involve joint production and collaborative research projects. "The accent will be on capitalizing on the nascent digital multimedia technology to create content and promote artistic expression," Professor Chang said. "The vision is to provide cutting-edge training for future generations of media professionals to meet increasing global competition." A formal agreement is expected in the next three to four months. "The impact of digital technology on film making is increasingly felt in China and in the BFA," commented BFA's President Zhang. "Hong Kong, as a movie capital of Asia where Chinese and Western cultures interact and pioneer in film technology, has unique experiences to offer." 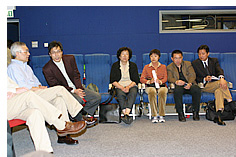 The group took a tour to the SCM, showing immense interests in its latest digital equipment and production facilities, as well as the breadth and structure of its academic programmes. The tour was followed by an hour-long discussion between the BFA visitors and SCM staff, in which a number of students' creative works were screened, and faculties from both sides delved into topics ranging from curriculum philosophy and design to student workload and assessment. Particular interest was also expressed in how the SCM factored creativity into its student recruitment process. 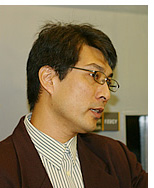 "Compared with the BFA with a history of more than 50 years, the SCM is like a five-year-old child," Dr Lester Chan said. "Yet, I was very impressed by the delegation members who are all open to new ideas, even from as young an institution like ours. The spirit of continuous improvement demonstrated by the BFA staff is worthy of respect," he added.

The BFA delegation visited CityU on their return trip from Taiwan where they toured major studios, arts and film schools, exchanging ideas and experiences with the local industry and educators on the development of film industry. The BFA's visit to CityU, according to Professor Zhang, should have been taken place last year had it not been the advent of SARS. CityU entered into a student exchange programme with the BFA in 2002, and the President led a delegation to the Academy in July 2003, when ways to strengthen bilateral ties were explored and the idea of a tripartite relationship involving USC was first broached. 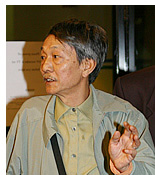 The BFA is the most prestigious breeding ground of mainland China professionals in the film and related industries, with renowned alumni such as Mr Chen Kaige and Mr Zhang Yimou , who have been dubbed China's fifth generation of directors. In the past seven months, the BFA sent one of its most experienced staff members, Professor Situ Zhaodun, to the SCM to teach a postgraduate course on making documentaries.