by JUCC ISTF
SHARE THIS
/* The following article is extracted from the "Information Security Newsletter" published by the JUCC IS Task Force. */
Wireless network (Wi-Fi) is now widely established and utilized at home, offices and everywhere in public areas such as rail stations, streets, and etc. This newsletter provides the technical knowledge of Wi-Fi technologies, relevant threats and countermeasures for building a secure internal Wi-Fi network.
Wireless Technologies
Classification of Networks
Technological advancement in wireless communications has led to the worldwide proliferation of networks. The various kinds of network technologies developed can be classified into the following categories according to their range of coverage:
Wireless Wide Area Network (WWAN)
WWAN offers the largest coverage. Voice and data can be transferred between mobile phones via messaging apps, web pages and video conferencing. In order to secure the transfer, encryption and authentication methods are adopted. Examples of WWAN are 4G, 3G and 2G networks.
Wireless Metropolitan Area Network (WMAN)
MAN (Metropolitan Area Network) covers across the entire city and WMAN provides the Wi-Fi network similar to MAN. WiMAX and Wireless MAN are both examples of this kind.
Wireless Local Area Network (WLAN)
WLAN is an 802.11i wireless network that facilitates the access of corporate environment. It is optimal for low range access with high bandwidth requirements. Internal Wi-Fi within the office area can be regarded as WLAN.
Wireless Personal Area Network (WPAN)
WPAN has the least coverage among all. It is usually adopted for devices which perform Bluetooth or Near Field Communication (NFC) functions. In Hong Kong, NFC-enabled devices like Octopus Card, is commonly used as a convenient form of electronic payment for public transport, retail shops and other services. In Hong Kong, most banks issue credit cards with a small chip implant to improve the payment processing time and its security level. 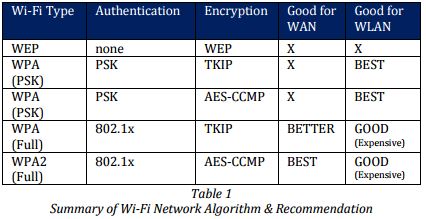 The following introduces the technologies and characteristics of wireless network.
WEP
Wired Equivalent Privacy (WEP)1 is a wireless security algorithm introduced as part of the 802.11 standard in September 1999. It used the recognizable key of 10 or 26 hexadecimal digits, and frequently used in router configuration.

Illustration above shows the flow of WEP authentication. If a non-root bridge tries to access the client device without authorization, the WEP will automatically reject the connection.
WEP encryption uses RC4 as a stream cipher, this serves the purpose of “IV” which is transmitted as plain text to avoid any repetition. However, a 24-bit IV is not long enough to ensure nonrepetition – there is still a 50% chance that the same IV will appear after 5,000 packets2.
Meanwhile, tools such as Aircrack, AirSnort, WEPCrack and DWEPutils which can be easily obtained from the Internet are capable of cracking WEP key in less than a minute. Indeed, there is a serious security weakness of RC4 adoption.
In summary, it is insecure to use WEP to access wireless network3.
WPA & WPA2

As there are obvious flaws in WEP, another wireless security algorithm, Wi-Fi Protected Access (WPA), was introduced in 2003 by Wi-Fi Alliance4. WPA was the interim security solution while 802.11i was then still under development. WPA adopts a pre-shared key (PSK), known as WPA-Personal and the Temporal Key Integrity Protocol (TKIP) for encryption which is different from WPA-Personal. WPA Enterprise uses keys or certificates generated by an authentication server. Within a year’s time WPA had an upgraded version called WPA2. This new version allows full 802.11i standard ratification. The major enhancement for WPA2 is the application of Advanced Encryption Standard (AES) for encryption. WPA2 is relatively secure – even the US government encrypts its highly confidential documents with this wireless security protocol.
Wireless Threats
Despite the benefits brought by wireless network technology, its derivative potential threats towards the network security should not be underestimated.
Different types of attack outlined in the following paragraphs and tables (Hacker methodologies and tools6) can be categorised as Active Attack and Passive Attack. The former includes DoS, Masquerade, Replay and Message Modification while the latter one includes Eavesdropping and Traffic Analysis.
Authentication Attacks
The main objective of Authentication Attacks is to steal the user’s identification and credentials for the sake of accessing the private network and its services. A list of types, methodologies and tools is captured in Table 2 for a quick reference. 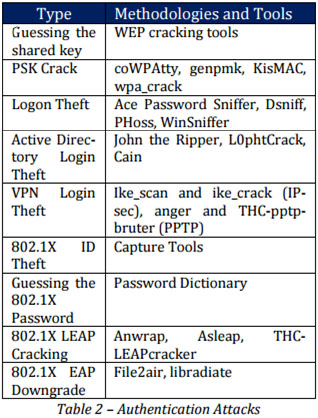 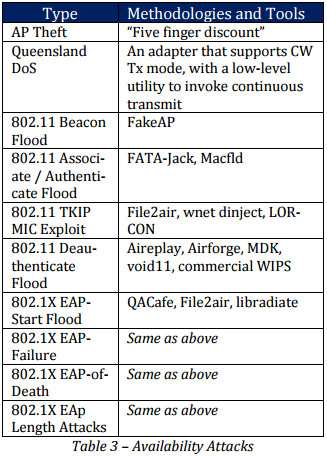 Wireless Sniffing – Unlike Evil Twin, attacker does not need to set up the rogue AP but simply deploy a sniffer tool to intercept data transmission via Wi-Fi network (Figure 4). It is difficult for victim to detect such attack unless network monitoring tool is deployed.

Peer-to-Peer Connection Attack – When all laptops configure wireless cards as ad-hoc mode and are connected together to form a network, attacker can connect to this network by adopting the same configuration, and consequently gain access to sensitive data (Figure 5).

Internal Wi-Fi Infrastructure
Security Best Practices to Implement an Internal Wi-Fi Infrastructure
After learning the possible security threats of Wi-Fi, the following security measures are highly recommended for the planning, implementation and operation of an internal Wi-Fi within a University environment:
Network WIPS Deployment – Deployment of Wireless Intrusion Prevention System (WIPS)11 can monitor radio spectrum for any existing unauthorized AP activities such as AP redirection, significant signal strength changes, AP spoofing and soft APs. When suspected AP activities are identified, alert will be generated and logged. Meanwhile, the high-risk connection will be disabled immediately and automatically.
To facilitate the deployment of WIPS, three approaches can be considered depending on budget and scale.
The first approach involves the installation of the lower-end AP which performs two roles: provide Wi-Fi connectivity and simultaneously do periodic scan for rogue APs. However, it is not very effective.
The second approach which is known as integrated WIPS, requires installing the sensor together with the AP for rogue AP scanning and seems to be more effective.
The final approach is called WIPS overlay, it can be implemented by the installation of sensors throughout the whole building; scanning result will be forwarded to the centralized Wi-Fi management server for further analysis, action and log archiving purposes. This approach is the most expensive one among the three as hardware implementation is required, but it is also the most effective one13.
Access Control Attack and Confidentiality Attack can be addressed by implementing such solution.
Wireless Bandwidth Management – The best way for individual user with comparatively low risk to seek higher security protection is to use Quality of Service (QoS)14 technique. QoS covers the aspects of network bandwidth, latency, jitter and reliability.
One of the key functions of QoS is inserting control over demanding bandwidth usage like BitTorrent, online games, HD movies or else. For business sector, QoS helps to control access right and balance usage, internal applications, videos streaming, VoIP calls and etc.
Previous Wi-Fi routers carried traditional QoS; however, this required strong technical knowledge and experience to configure the settings. Now the latest router models provide a user-friendly way of implementing QoS: Intelligent QoS. It helps to prioritize the bandwidth in four categories such as voice, video, applications and background activities (internal printing jobs, file downloads and other traffic).
Implementation of QoS together with traditional IDS/IPS system enhances the level of network security, prevents attack from unexpected and suspicious behaviours which is bandwidth demanding.
Implementing wireless bandwidth management can prevent Availability Attack.
Network Segregation – Not only can Network segregation minimise the risk of sensitive data leakage and unauthorized access of the network, it can also reduce the possibility of single point of failure when the network is comprised.
For secure internal Wi-Fi planning and implementation, the following tips are worth considering:
Multi-level Network Controls – The more layers of network segments are added, the more difficult for cybercriminals to tap into the network. If the existing network infrastructure restricts such change, consider implementing isolation for the newly built internal Wi-Fi or networks that planned to be built, and revamp the whole infrastructure by phases if necessary.
Whitelist or Hybrid Approach – Instead of blocking or allowing certain types of network access, define both whitelist or blacklist respectively for acceptable or unacceptable traffic that are already known. Continuous audit and review of these listing should be performed annually or by ad hoc.
Least Privileged Access Control – Even though service vendors request to access the network (including Wi-Fi) for maintenance or project-wise tasks, the mandatory access control should be in place and access log should be properly configured and securely stored for review for the sake of security incident investigation.
This security control can block Integrity Attack proactively and effectively.
Mandatory Access Control – Mechanism like MAC Addresses Registration of pre-approved university devices and self-registration of MAC Address from service vendors’ devices should be properly updated, defined and operated. Regular review and audit for MAC addresses access log should be performed to avoid rogue school devices MAC connection, an issue arising from “Bring Your Own Device (BYOD)”.
For guests’ devices, Guest Wi-Fi at DMZ can be configured separately at another VLAN for the purpose of Internet connection; MAC addresses control to deny any school devices connection to this Guest Wi-Fi has to be configured as well.
By adopting this security measure, Access Control Attack can be blocked effectively.
Network Encryption Technique – When using Wi-Fi network, strong encryption protocol should be adopted at all APs.
The latest Wi-Fi encryption protocol, WPA2 with AES mentioned earlier in this newsletter, is strong enough for network encryption, but regular technology review and update are certainly needed.
By applying this practice, Integrity and Access Control Attacks can be avoided.
Virtual Private Network (VPN) – Some overseas Universities provide free VPN connection for their staff and student to access the Intranet externally17. VPN service can secure data transmission and it is not complex to configure and use. University should consider applying this service if there are frequent academic activities held outside campus.
Conclusion
The landscape of IT security threat changes rapidly. It is prudent for University management and technical staff to keep abreast of the threats and implement controls to eventually cope with these challenges.
When planning, building and operating an internal Wi-Fi infrastructure, it is important to understand the risk implications and apply the security best practices as described in this newsletter. It is also the university’s responsibility to maintain the confidentiality, integrity and availability of information security.