by JUCC ISTF
SHARE THIS
/* The following article is extracted from the "Information Security Newsletter" published by the JUCC IS Task Force. */
Developing secure application is critical to an organization’s reputation and operational efficiency. The effect of compromised applications resulting in inability to serve the community or data breaches of student and staff information can bring an organization to headline news with bad publicity, losing user confidence and even worse law suits of data privacy breaches. While application development teams are confronted with excessive functional requirements and enhancements under tight time pressure, latefound security vulnerabilities in application would be costly for an organization to address and fix.
Security should be built as an integral part of the application development framework from the beginning during user requirement until the stage of testing and assurance review. All changes should also include a security risk assessment to ensure enhanced software modules would not introduce security weaknesses.
This newsletter portrays the need and strategy of enhancing the present stance of application development by incorporating the necessary processes in order to establish a secure development life cycle. Security vulnerabilities and application defects would be minimized with faster time to remediate.
Challenges of Secure Application Development
There are several key challenging issues in developing secure and reliable application. Developers are typically not trained on secure coding practices. As a result, they are not aware of the myriad ways of introducing security vulnerabilities into their codes. There are also misalignment issues between project team stakeholders and development team across the software development life cycle:
Since proper security testing and reviews are ignored and overlooked during the development life cycle, applications can end up with vulnerabilities down the road. Exploit and breaches of application vulnerabilities had been reported across industry’s vertical and geopolitical boundaries:
Primitives of Application Security Flaw
First primitive technique used is the soft leak,4 which allows RCE program to manipulate memory in the targeted application without any trace or security repercussions. These would happen towards most common application extension or program which has valid program functionality. For example, a web application server, by design, will accept HTTP requests from a client. The client will send information which is held until session termination occurs. By understanding the mechanics of how requests and sessions work, the attacker may write RCE exploits targeting certain memory layout of a particular application.
The second primitive security flaw is the hard leak.5  The hard leak, or resource leak, is quite familiar to most C/C++ programmers. The leak occurs when the developers forget to free memory that is acquired dynamically during runtime. While most developers think of this as a quality problem that will result in massive memory overflow at worst, many attackers see this as an opportunity to exploit stability and burst the temp filesys. By acquiring memory permanently, an attacker can retain connectivity in certain portions of memory that is never subsequently used throughout the lifetime of a process.
The third primitive involves integer overflow.6 This refers to mathematical operation attempting to store a number larger than an integer can hold and then the excess is lost. The loss of the excess data is sometimes referred to as an integer “wrap”. For example, an unsigned 32-bit integer can hold a maximum positive value. By adding 1 to that maximum positive value, the integer will start counting again at zero (UINT_MAX + 1 == 0). A real world example is the odometer of a car rolling over after 1 million miles; re-starting its mileage count from zero. By using this buffer overflow in memory allocation routine, an attacker can allocate less memory towards file sys intended.
Finally, the last primitive is about buffer overflow.7 This is a common kind of vulnerability found in firmware based on assembly programs (e.g. C/C++ programs). A buffer overflow is caused when the program writes past the end of a buffer, which causing corruption of adjacent programs memory. In some cases, this will automatically execute the overwritten content of a stack or heap that allows an attacker to exploit the normal operation of the system and, ultimately, take over the flow of control from the program.
As illustrated below, by limiting the number of primitives within codes, developers can make the process of exploiting application much more difficult, thereby increasing the cost of exploitation. 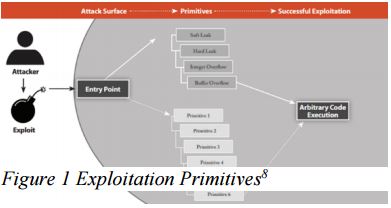 Common Application Security Vulnerabilities
Besides understanding the primitives of exploiting application, it is also important for developers to take note of the following common application security vulnerabilities:

Arbitrary code - Through arbitrary code execution, an attacker may acquire control of a target system through buffer overflow vulnerability, thereby gaining the power to execute commands application functions at will. These types of exploits take advantage of application bugs that allows the RCE towards operating systems and injects shellcode to allow the attacker to run arbitrary commands on another’s computer. Once this is accomplished, the attacker will proceed to escalate privileges, which enables it to be used to perform various malicious tasks, including spreading email spam and launching denial-of-service attacks.

Data loss: This class of security vulnerability results in sensitive data loss due to corruption, modification, or theft of data. Data loss features prominently in the 2011 CWE/SANS in Top 25 Most Dangerous Application Errors list.9

Security bypass: An attacker could leverage application vulnerabilities to exploit and bypass authorization and authentication modules. Vulnerabilities in application where filenames are unsafely checked before being used leading to unauthorized access to resources in extreme cases.

Denial of service: This class of vulnerability may lead to application slowing down or failing to respond. An application can crash with unintended errors, thus preventing from legitimate use.

Loss of integrity: Integrity is defined as the expectation of reliability in behaviour and performance of application processes. Integrity of application is compromised when expression evaluation that do not meet common criteria standards leading to side effects, misuse or mixing of data types. These vulnerabilities may result in inadvertent errors in program code and not easily fixed.
Strategic Approach to Application Security

Training, policy and organizational capabilities - A serial of Intensive training for application development teams in the basics of secure coding and ensure they stay informed of the latest trends in security issues and vulnerabilities

Planning and design - Implement STRIDE MODEL11consist of threat and vulnerabilities in the initial design of new applications and features which permits the integration of secure way that minimizes disruptions to plans and schedules in-time.

Verification and testing - Perform series of security tests which should be defined during the planning and design stage. Examples of tests include code review, penetration test, load and stress test, and security functional tests to ensure the application is functionally working and secure as designed. 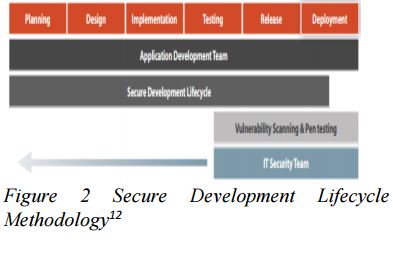 Bring business risk management into application development – Because security vulnerabilities can impact an organization’s reputations and business objectives, development team executives must rethink development practices and mandate a mature process such as SDL which is capable of delivering quality and security assurance

Testing and assurance – Different types of tests (e.g. code review, penetration test, load and stress test, security functional tests) should be defined with sufficient time allocated to be executed at different stages of application development life cycle. Besides testing before production, some tests such as penetration tests should be carried out whenever there is a major release, and even regularly after production because the threat landscape and new exploits will continue to evolve.